Arrived at Shona 2 days late because of flight cancellation due to a no fly by law in Frankfurt.

Arrive at Shona at 1:00 PM, have lunch and sight in the rifles. Decided to go after Mountain Zebra and Gemsbok. I go with Brandon and Johan Veldsman is our PH. Kelly goes out with PH Jonus and apprentice PH Joshua. We spot a Gemsbok and Brandon does a stalk with no luck. We walk up a hill and get into a blind to watch a water hole nothing coming in. We decide to walk back to the truck, as we are going down the hill a Zebra comes out seems to spot us and walks away. goes about 20 yards and stops broadside. One shot and Brandon has his first African animal in the salt 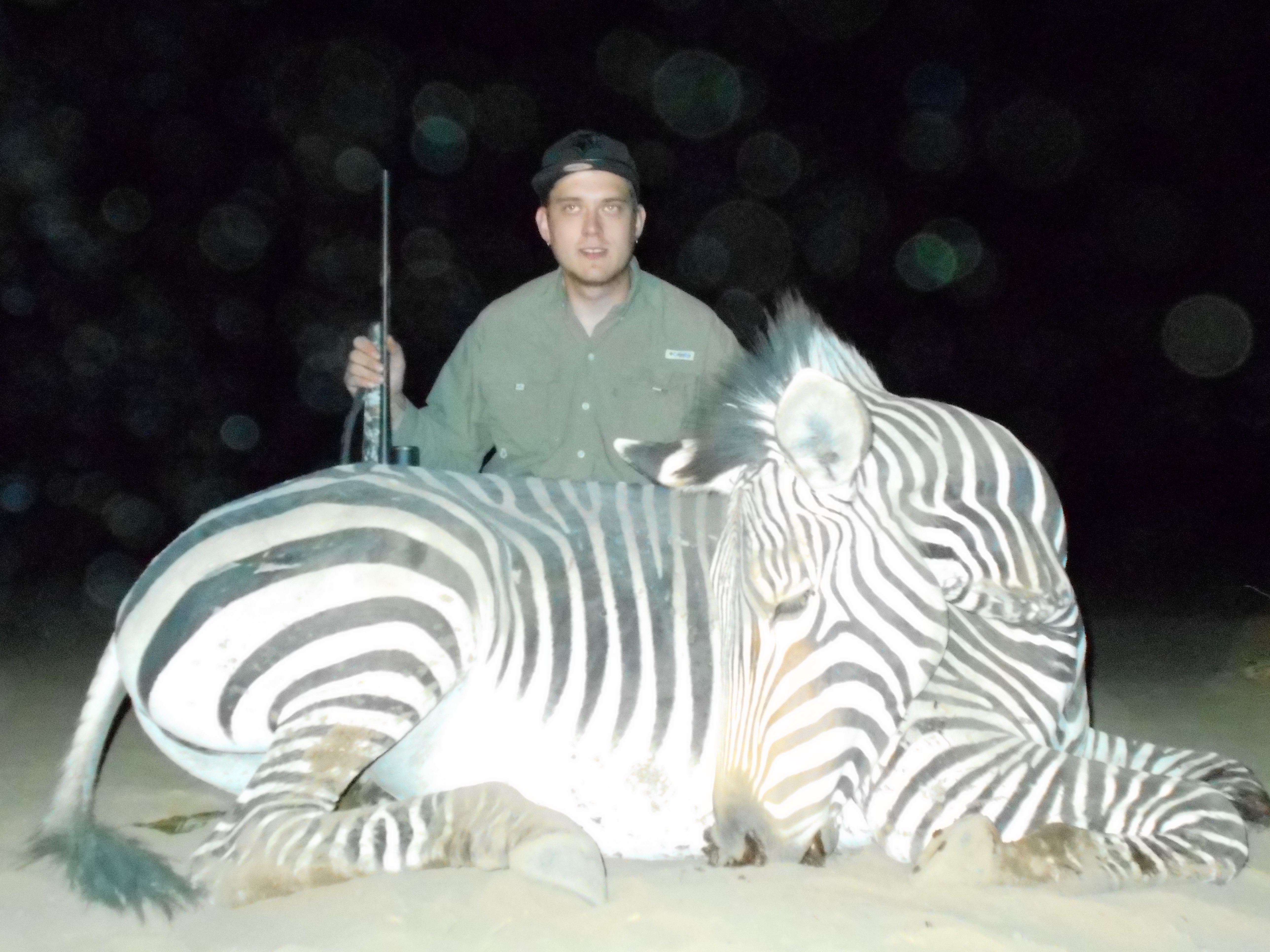 Next day had breakfast went out again with Brandon did a stalk on a Gemsbok with no luck. did a lot of glassing but not many animals moving. the weather is cold and conditions are very dry. Johan had told we he got less the a quarter of his usual rain fall,
Found where a Leopard was hitting a bait so Johan offered it to me at a very good price. I said yes so into the blind later this afternoon. We get back to camp and Kelly, after a long stalk in the hills had got his Zebra

Had lunch and got ready to go into the blind, the boys go out together. Into the blind no show on the Leopard, but lots of Honey Badgers. I like Johan’s blind he has a bed for the client, so I managed about 6 hours of sleep. Back to camp for a late breakfast. Learned that Kelly had got a Duiker [ Damn this was on my list and he beat me to it] Went out and checked and renewed baits, no hits by the Leopard. Back to camp waited for the boys to come in, they had both shot at Gemsbok and lost them in the dark.

Went out the next morning with the dogs. checked where Brandon had shot his not a trace of blood. Got on Kelly’s and spent about 2 hours mainly watch the dogs work. Joshua come to us and takes us back to the truck and we drive to the river and wait. We hear the dogs take after something then nothing. After about an hour Jonus come running up “Kelly grab your rifle” and the run off, with me behind them there is a Gemsbok laying in the trees wounded, Kelly gets on his knees and shoots it, it is not the one that Kelly shot at the night before, but is the one Brandon shot at. The last they had seen ok Kelly’s it had jumped the fence and kept on going. The one that Brandon shot was a small cow, so Johan said we will call it a management one so Brandon can get a better one.

Lesson to be learnt here even though we didn’t find any blood we should have tracked it more. The PH and you both have an obligation to the animal. Kelly was pretty bummed out about loosing his, he has very good ethics. He did a quartering away shot, and i told him thats not the kind of shot to try on the second day, on the last day and a huge animal maybe, but be sure that you can get the bullet into the vitals.

Im tired so I will stop here and continue in the morning. but ill leave you with some scenery pictures

Back at it I realized I didn’t post a picture of Kelly;s Duiker cant seem to find one.
Loaded up and went to Ekongo Lodge went out with Kelly and Jonus after Eland and Hartebeest Did a couple of stalks with no luck. the area we where hunting in had lots of game, but was very brushy. Got back to camp and Brandon with Johan had got a Blue Wildebeest. 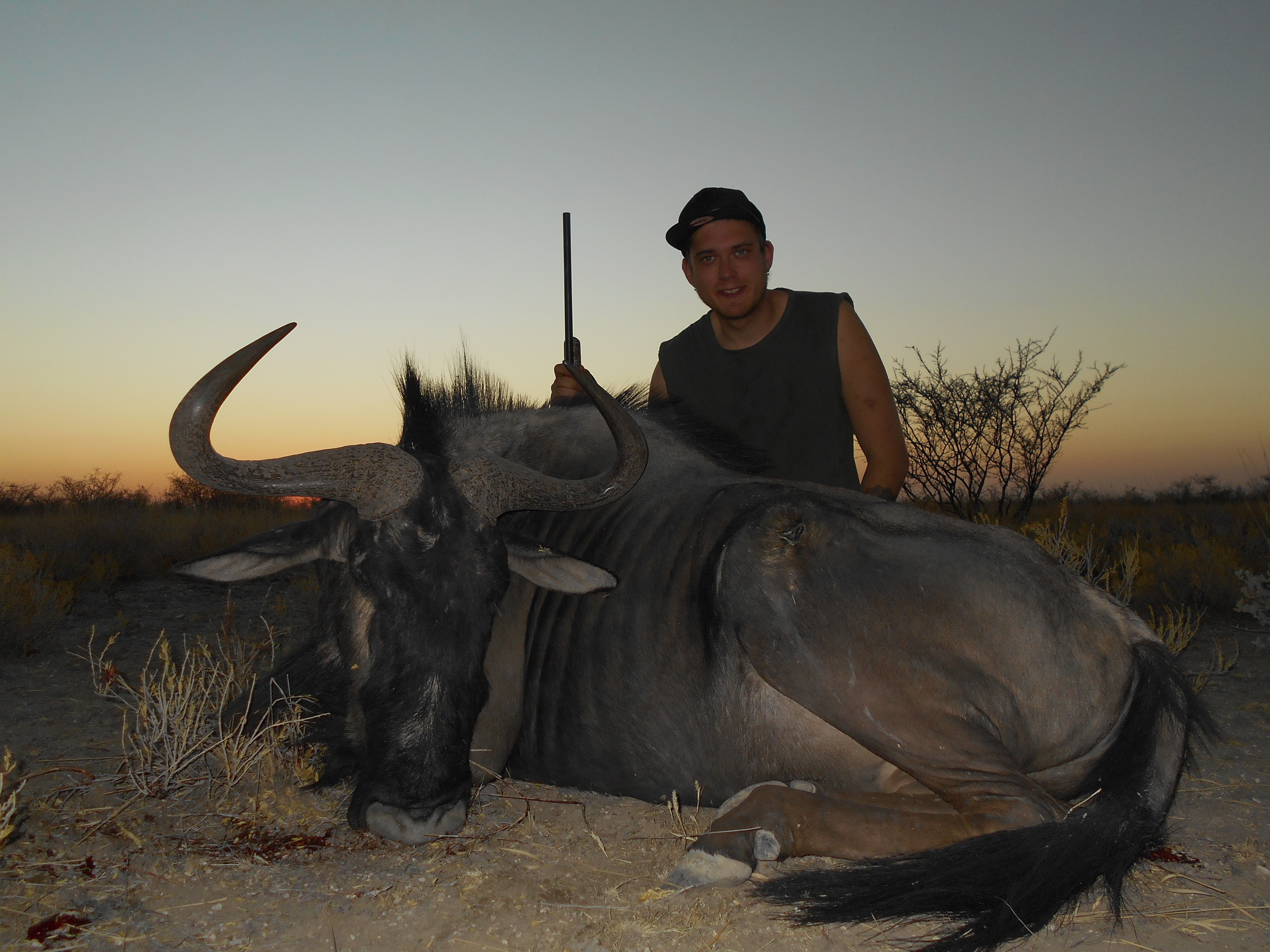 Went out next morning again with Kelly did 2-4 stalks on Eland but couldn’t get a shot, lots of game but lots of brush and thorns. Very hard hunting. Kelly says he really likes this. Back for lunch Brandon had got a very nice Kudu.

Back out after Eland, seeing lots of animals in the bottom land. Kelly does a couple of stalks on Eland, I do a couple on Blue Wildebeest without getting a shot off. Back to camp for the night and Brandon had got his Springbok. turns out the area Brandon was hunting was a lot more open, make a plan for all of us to hunt that side of the farm. 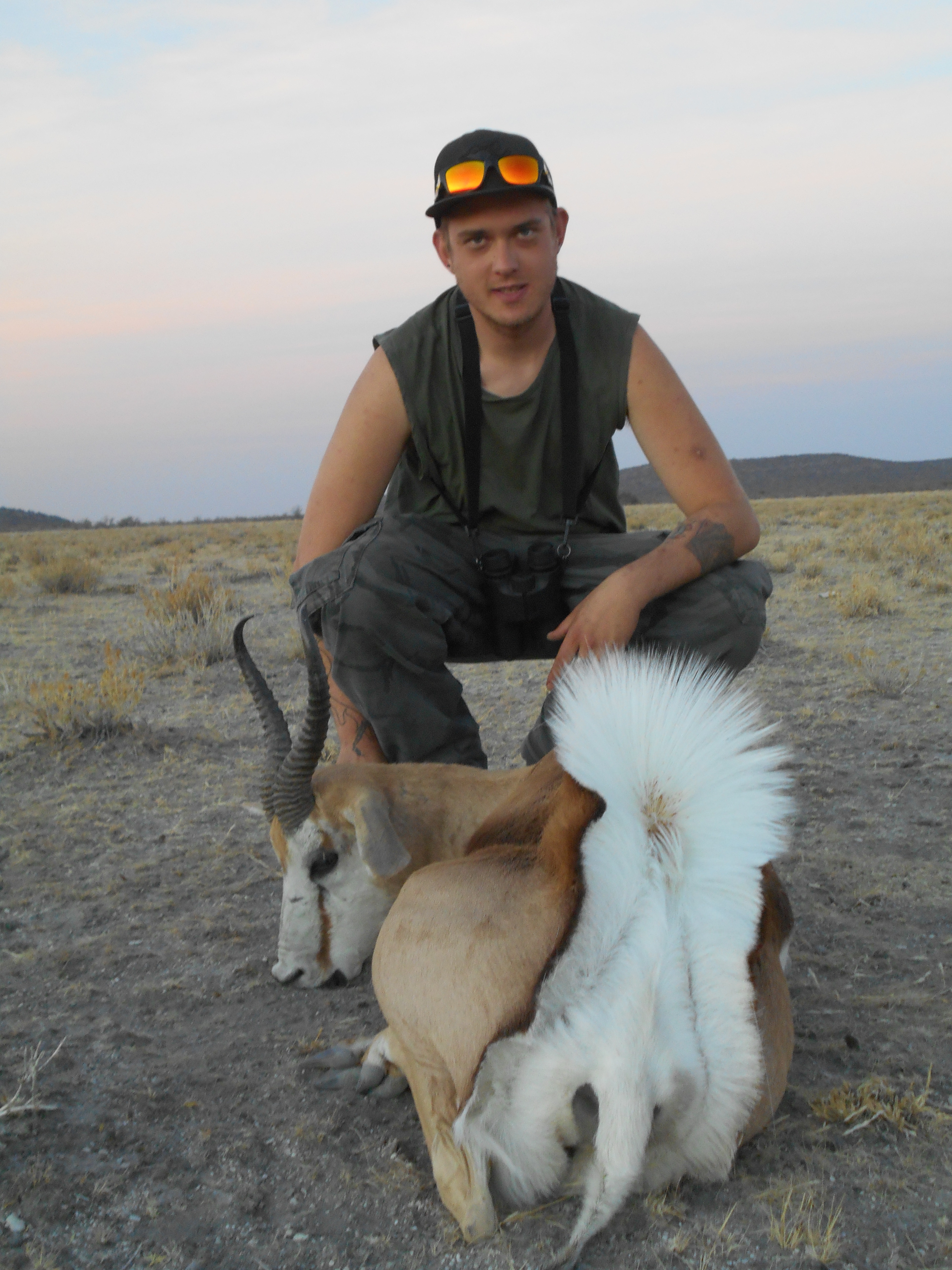 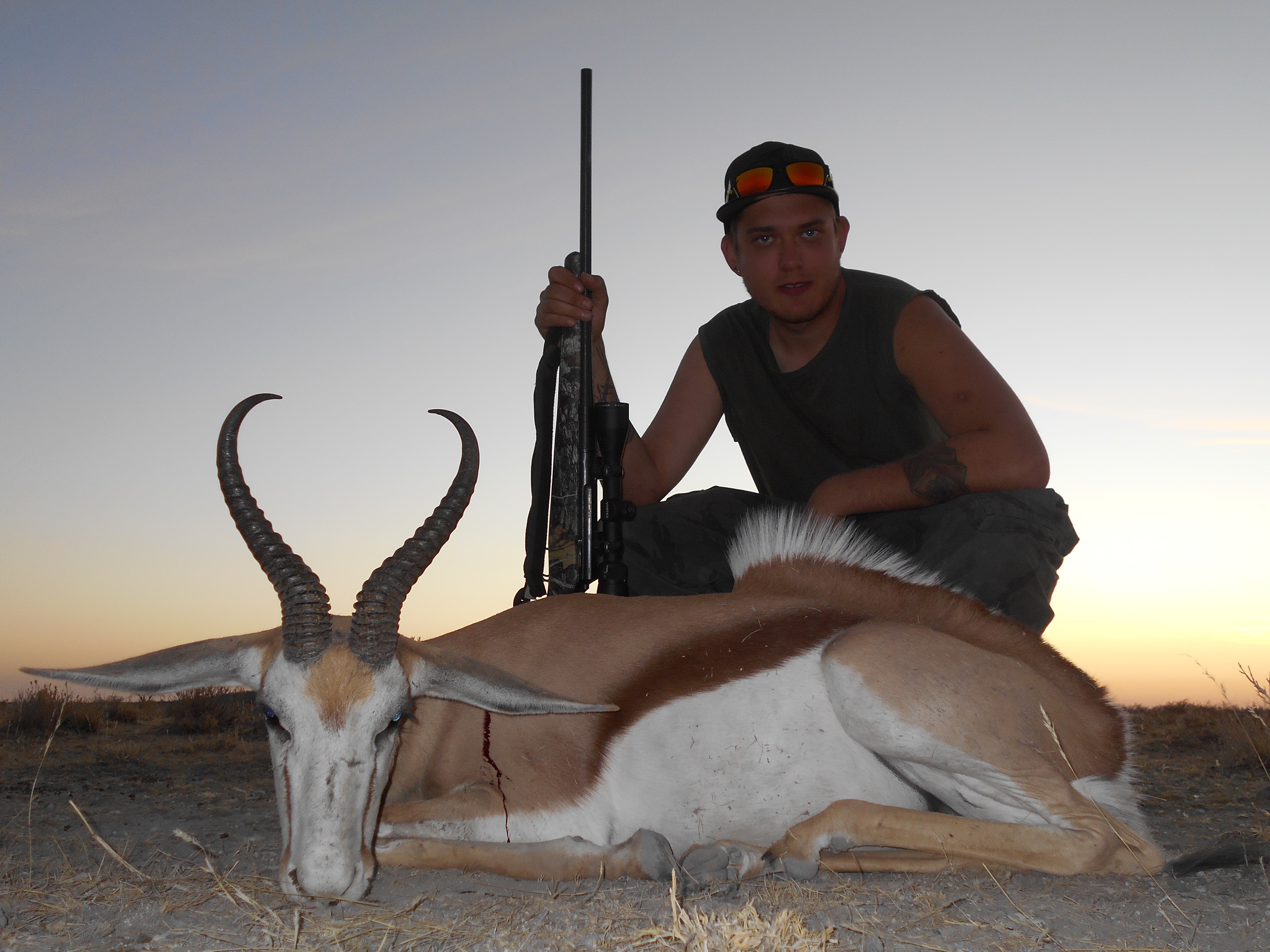 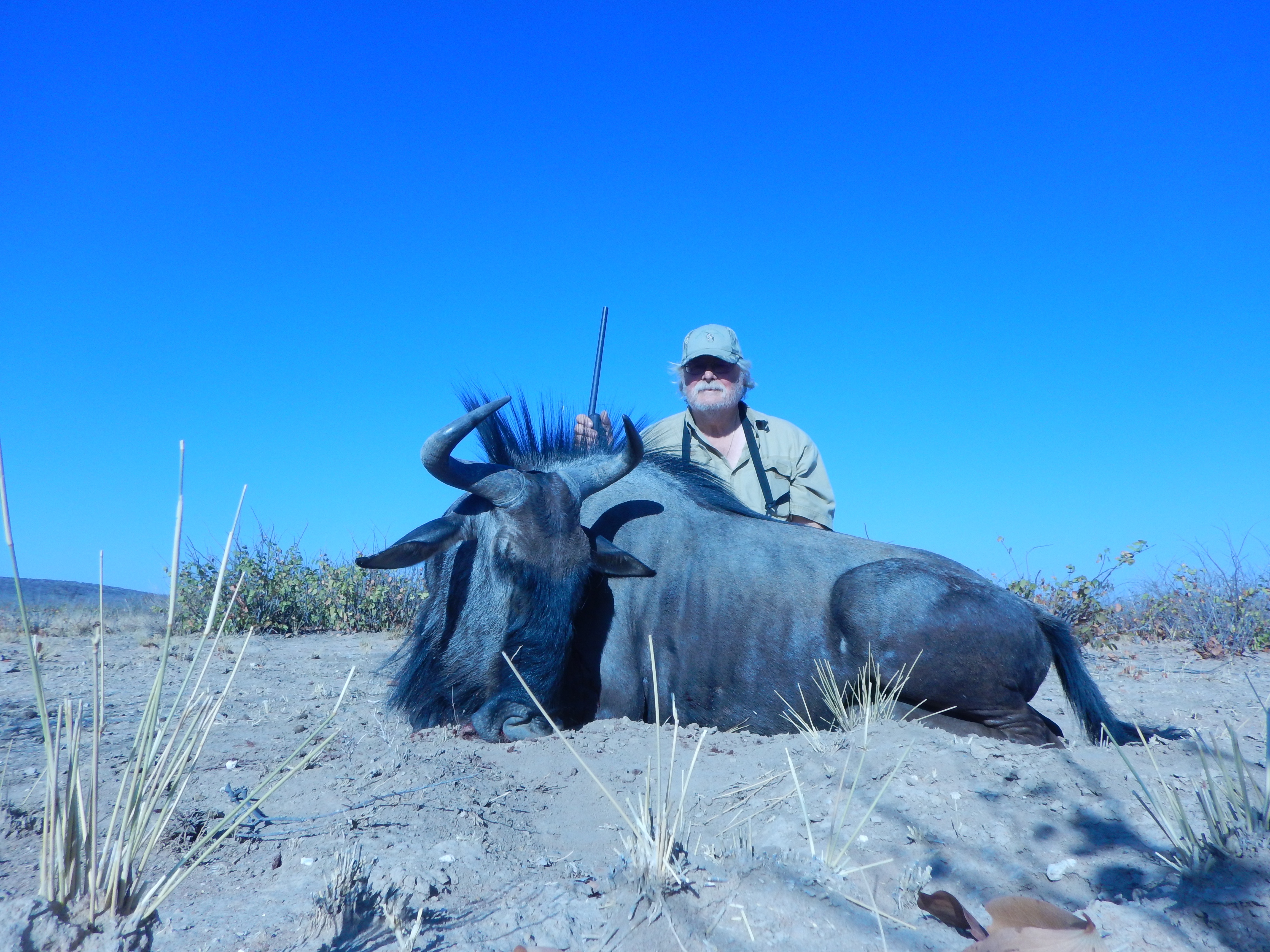 While I was stalking my Wildebeest the had radioed that Kelly had got his Eland, a very nice one and he worked hard for it. 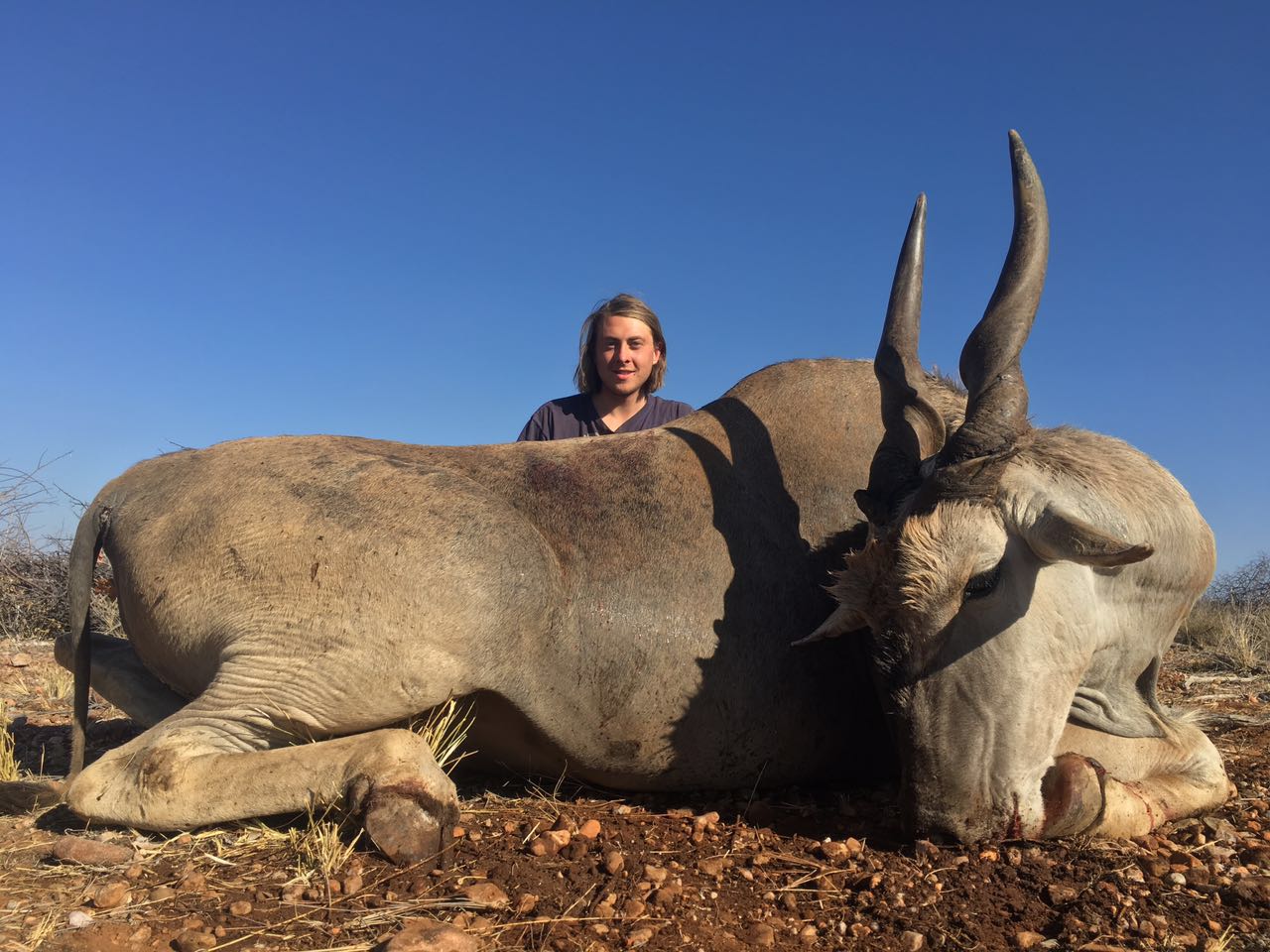 on the way back ran into the other truck Kelly was stalking Impala, Heard shot and went and found them. Turns out Kelly followed instructions to a “T”. They had talked about shooting rams, but when Johan said shoot the last one meaning the last ram, Kelly shot the last one inline which was a female, me thinks there was a little tiredness involved.

Kelly decided to celebrate his success and was in no shape to hunt the next morning, so Brandon and I went went out after warthog with out any success. Back to the lodge load up and head back to Shona, The boys went out after Gemsbok and Warthog while Johan and I checked baits, nothing hitting them. No luck with the boys.

The next morning Kelly went out with a new PH Ruan to his farm after Hartebeest. Brandon and I went out after Gemsbok and Duiker with Jonus. stalked a couple of Gemsbok no luck. while stalking a Gemsbok spotted a Duiker, after a short stalk I had my Duiker. I drove it to the skinning shed while Brandon and Jonus continued after Gemsbok. was told Kelly got a nice Warthog. 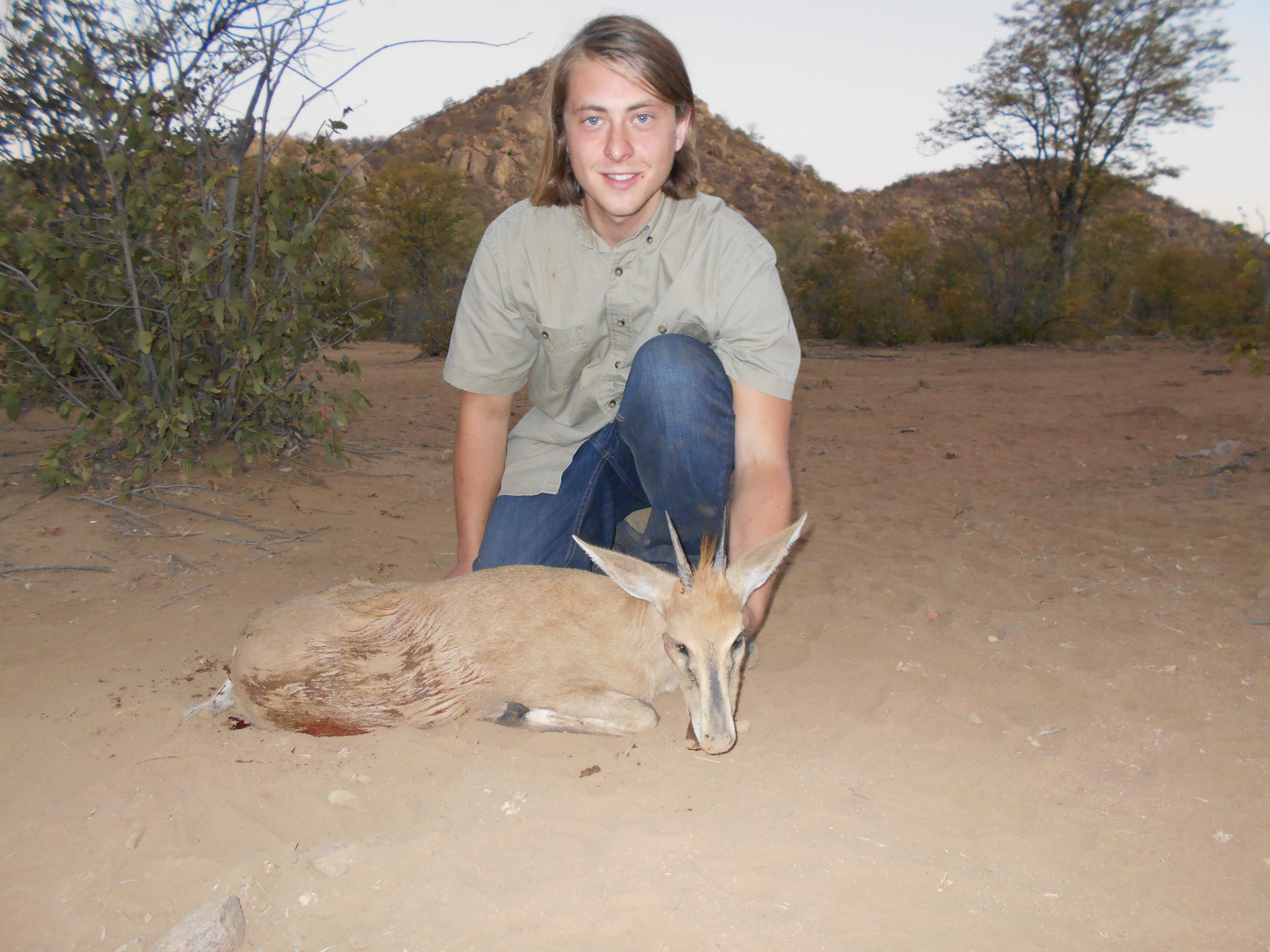 Kelly”s Duiker and his Warthog 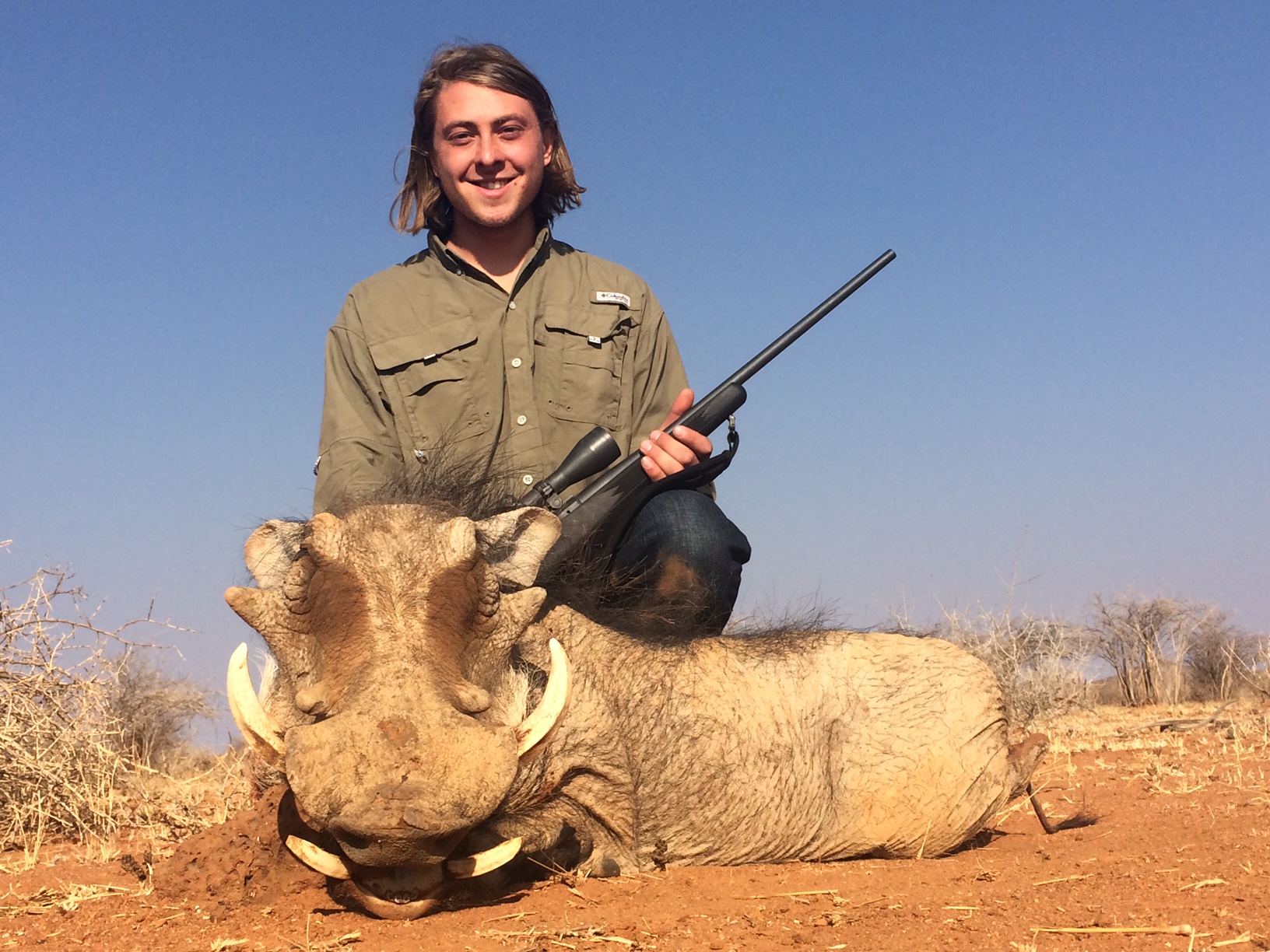 went with Kelly the next day did a couple of stalks on Hartebeest without getting a shot off. Went to a water hole and sat for Warthogs. After a while Kelly and Ruan went looking for Hartebeest. We heard a shot, Kelly shot a Jackal. When they got back we went to another water hole and waited for Warthog, spotted one and started a stalk, Joshua called us and said there was a bigger one at the waterhole. Came back and stalked it found it lying under a tree. tried a shot from a awkward position and shot over top of it. The gods where telling me something, went back and tried for the first one with out any luck. Driving out we spot a Warthog about 400 meters up a hill and it is huge. Get off the truck and do a stalk, it’s behind a bush so get into a sitting position on the sticks. As it’s coming out I realize it is big, wait for it to set out and dropped it in it’s tracks. 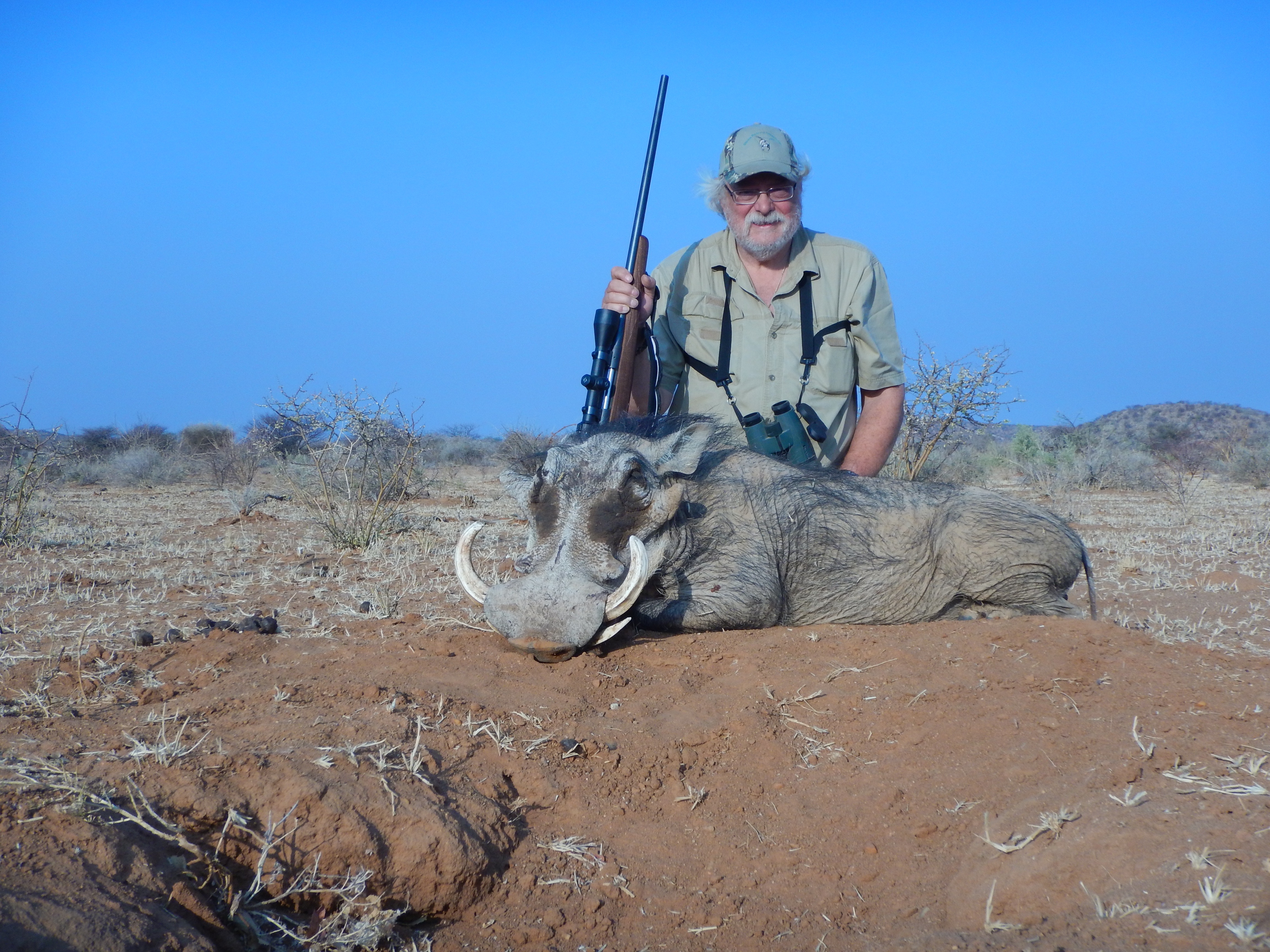 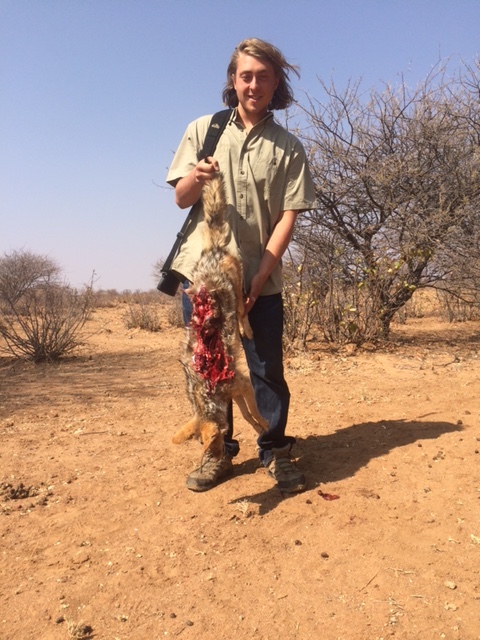 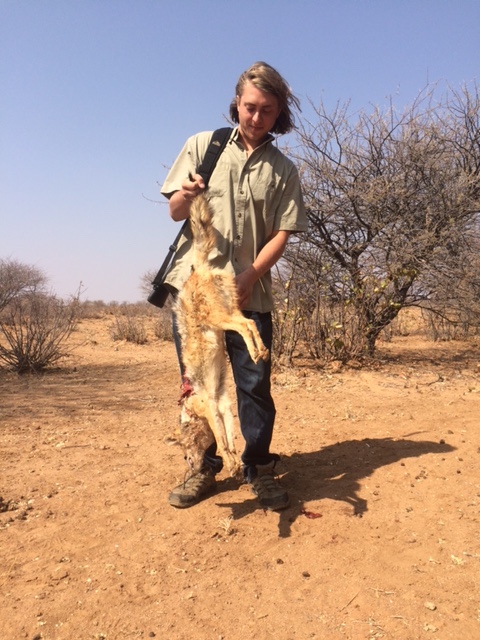 Meanwhile Brandon had got his Gemsbok a nice female

So that evening the boys rebel a bit they are tired and want to sleep in, it is decided that we will have brunch at 10:00 AM and go sit on water holes for Baboon. At 2:15 PM Kelly and myself head to a farm 25 minutes south for Springbok. This is the same farm I got mine at 2 years ago. We drive to an area and Johan tells Ruan and Kelly to stalk into area to see if they can find any. Meanwhile Johan and me wait less people less chance of spooking them. After 35-40 minutes we here a shot Ruan calls on the radio Kelly has his Springbok, Load up head back to camp Brandon has his Baboon, it took him 4 shots first one at 200 meters to far for someone that doesn’t practice a lot. 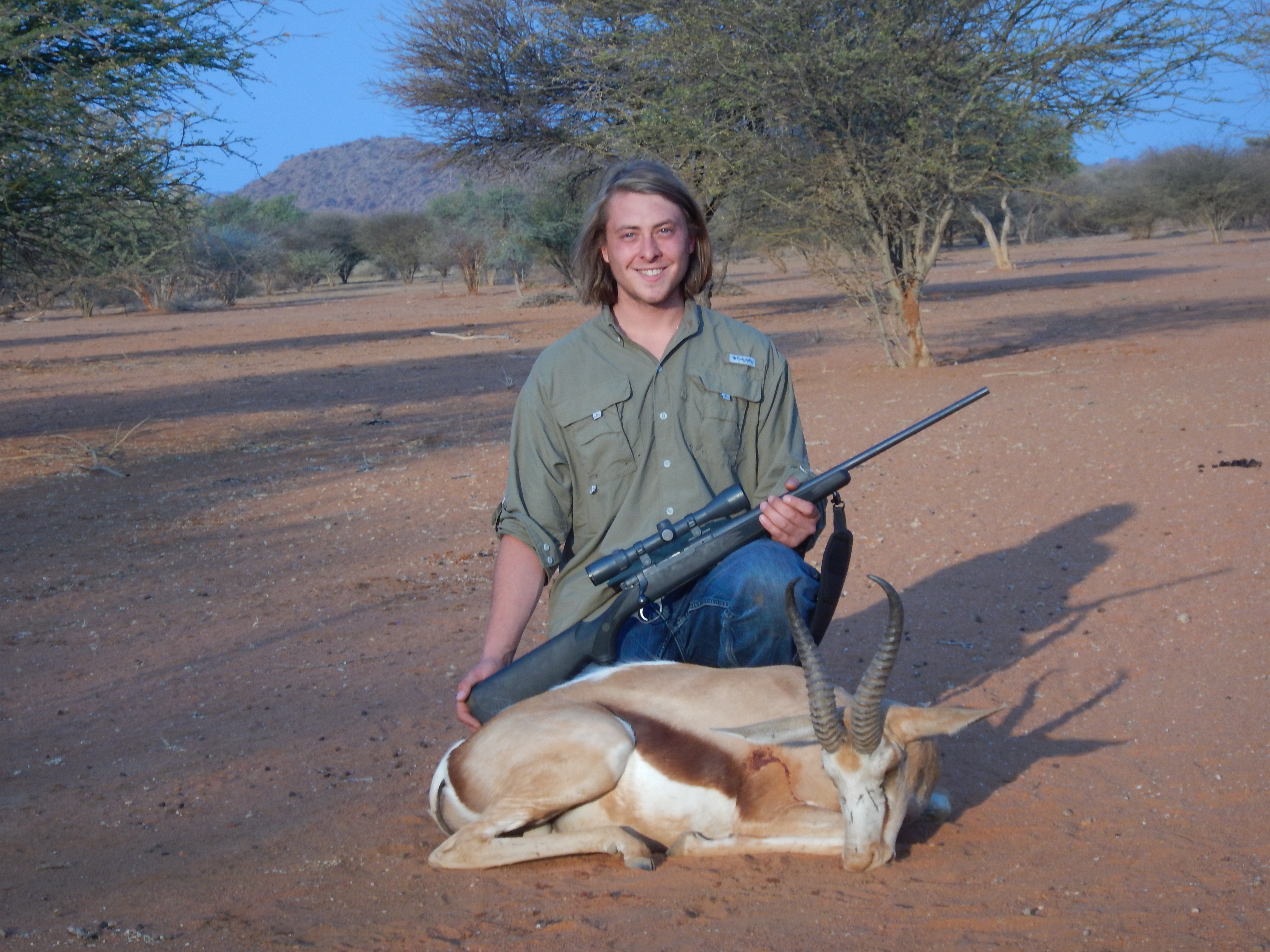 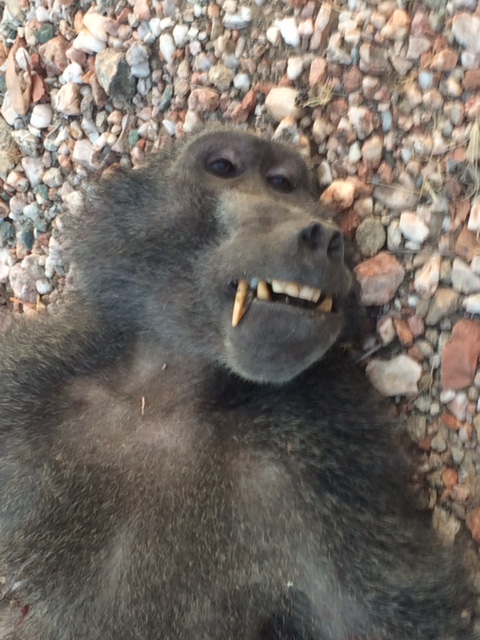 One of the things we had wanted to do was spend a couple of days in Etosha Park and because of the delays in flights we hadn’t. we where doing well on the hunt, I was done, Kelly had a Hartebeest and a Baboon and Brandon had a Warthog. We decided to do a day trip to the park, which left us with one day to hunt before we left. The park was beautiful lots of game so here are some pictures. 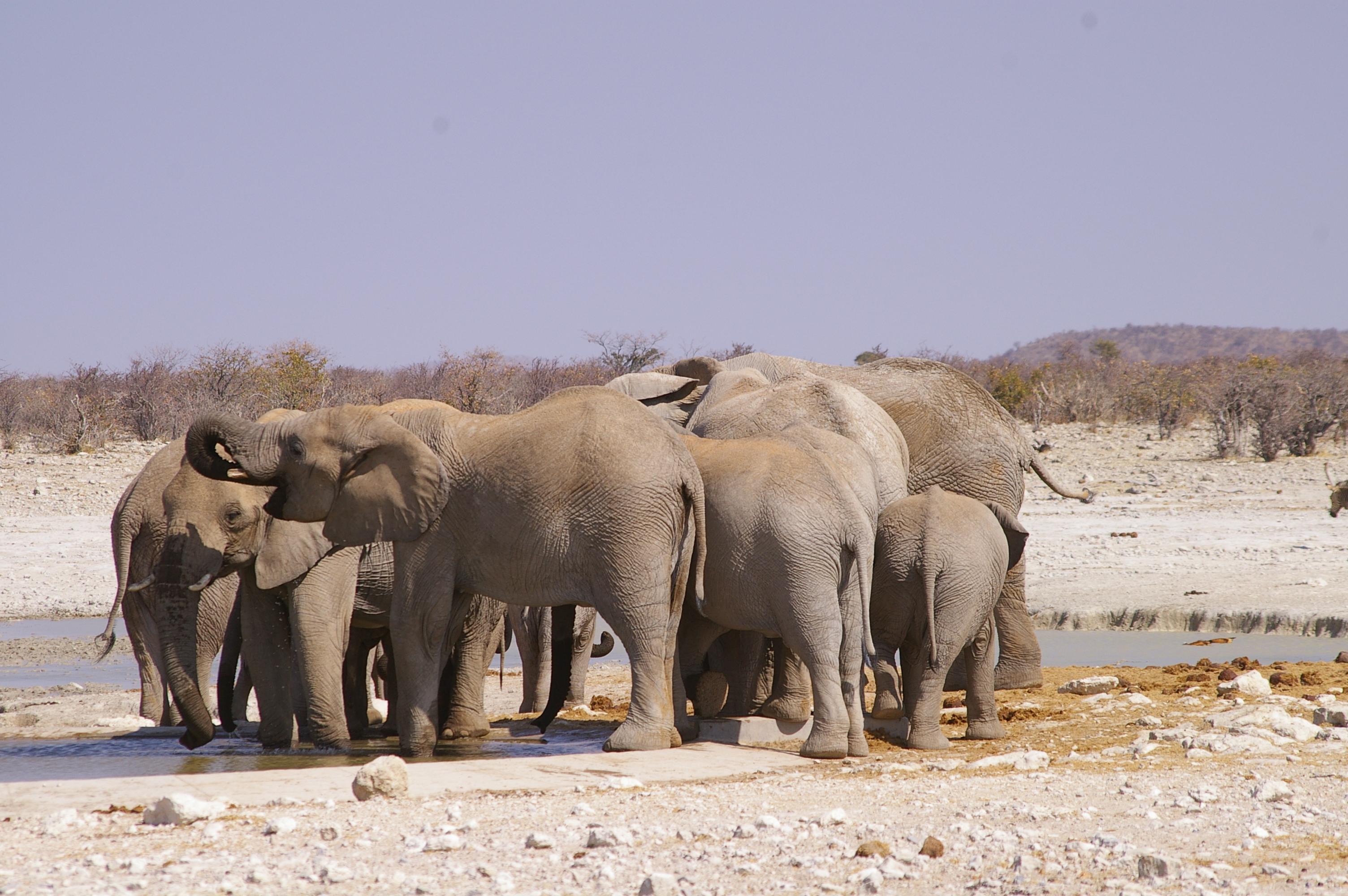 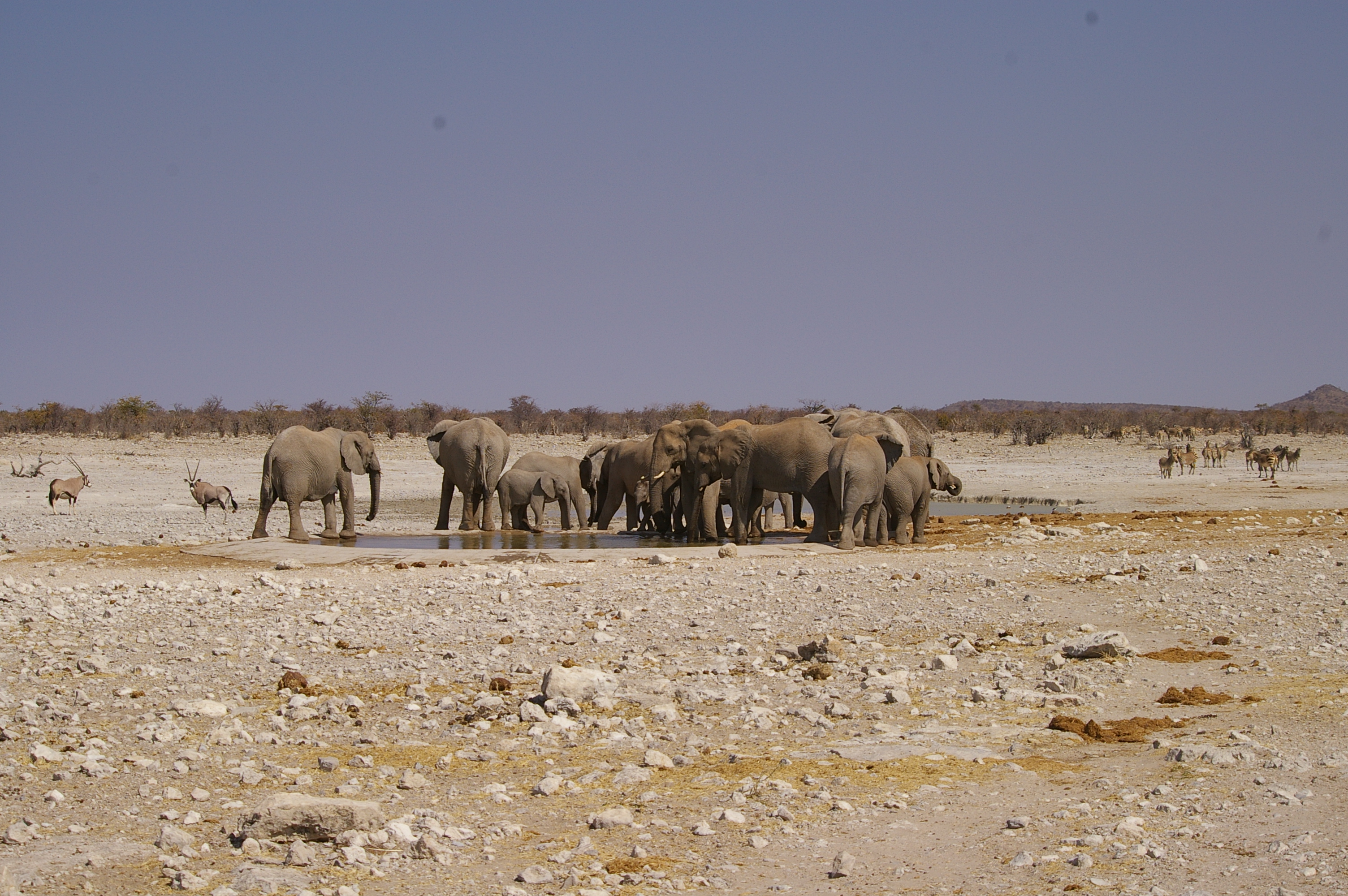 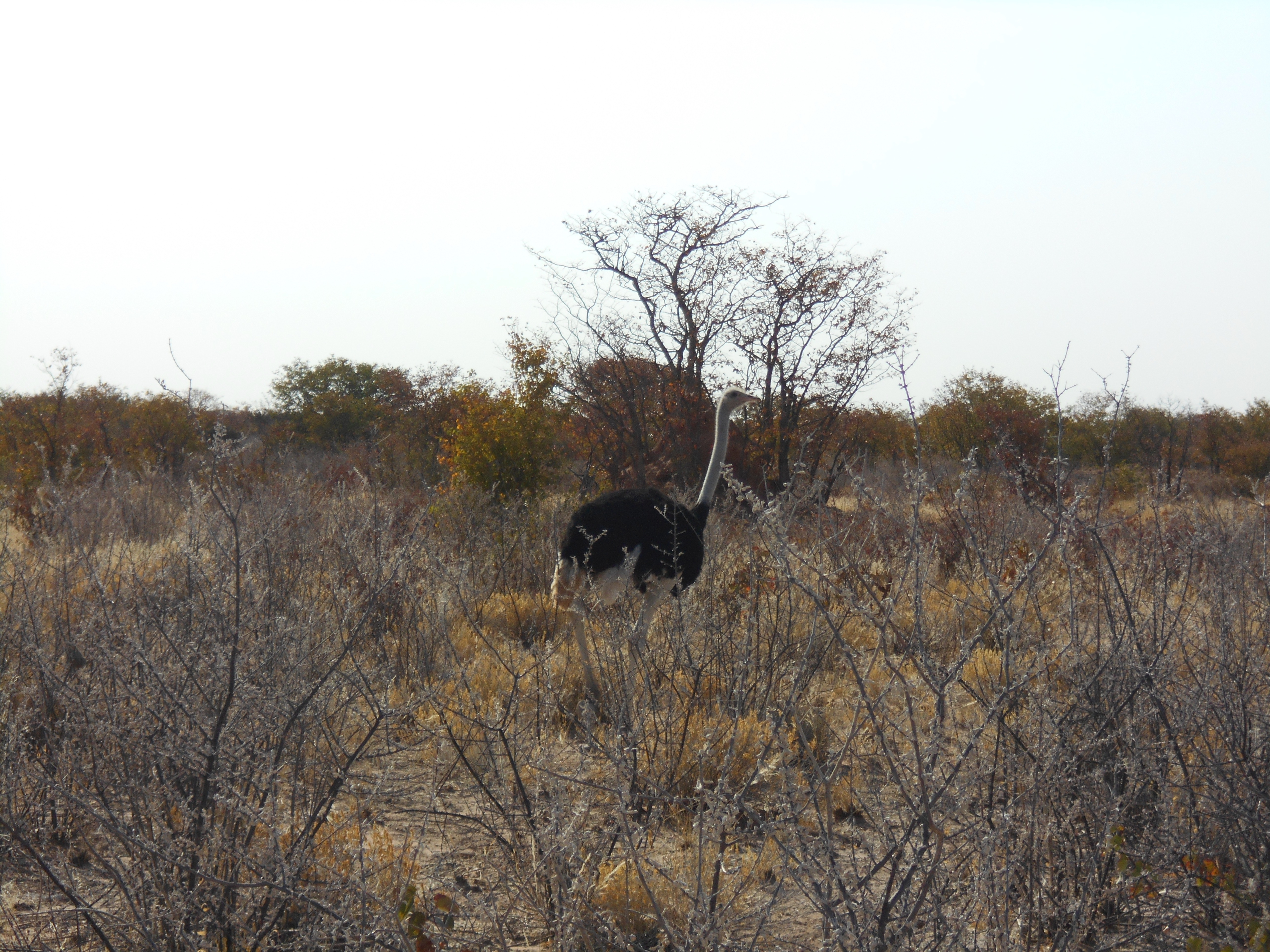 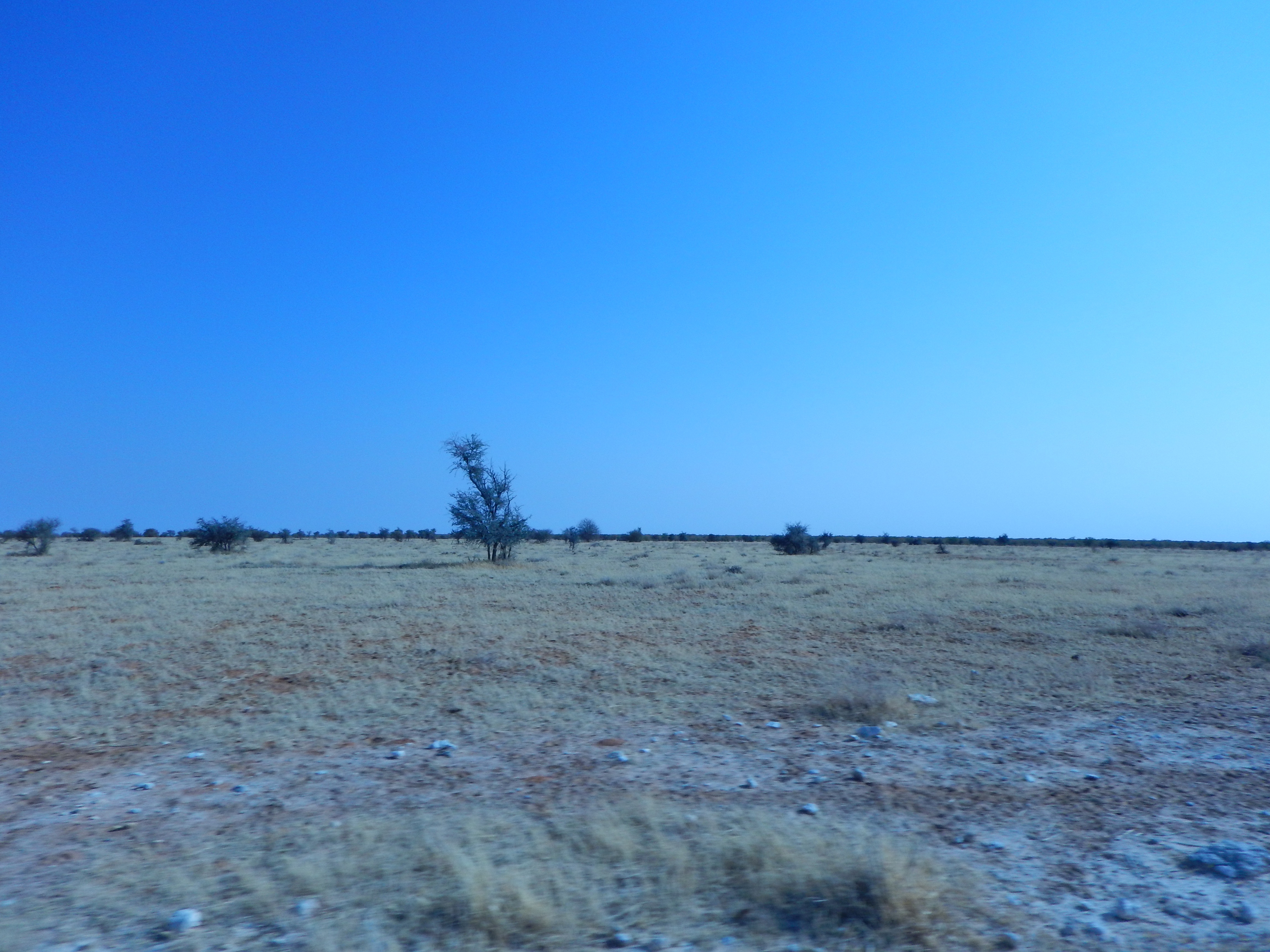 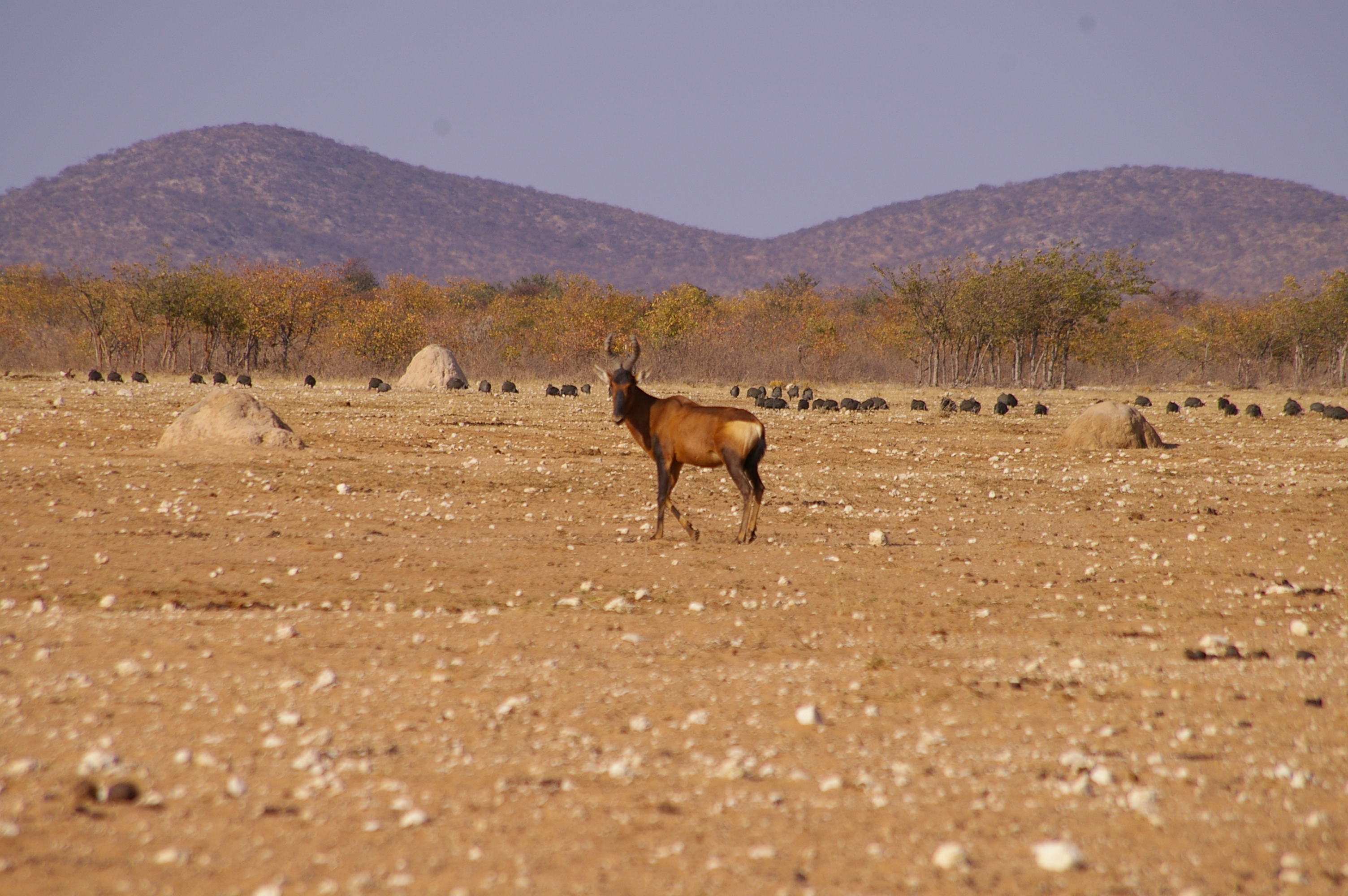 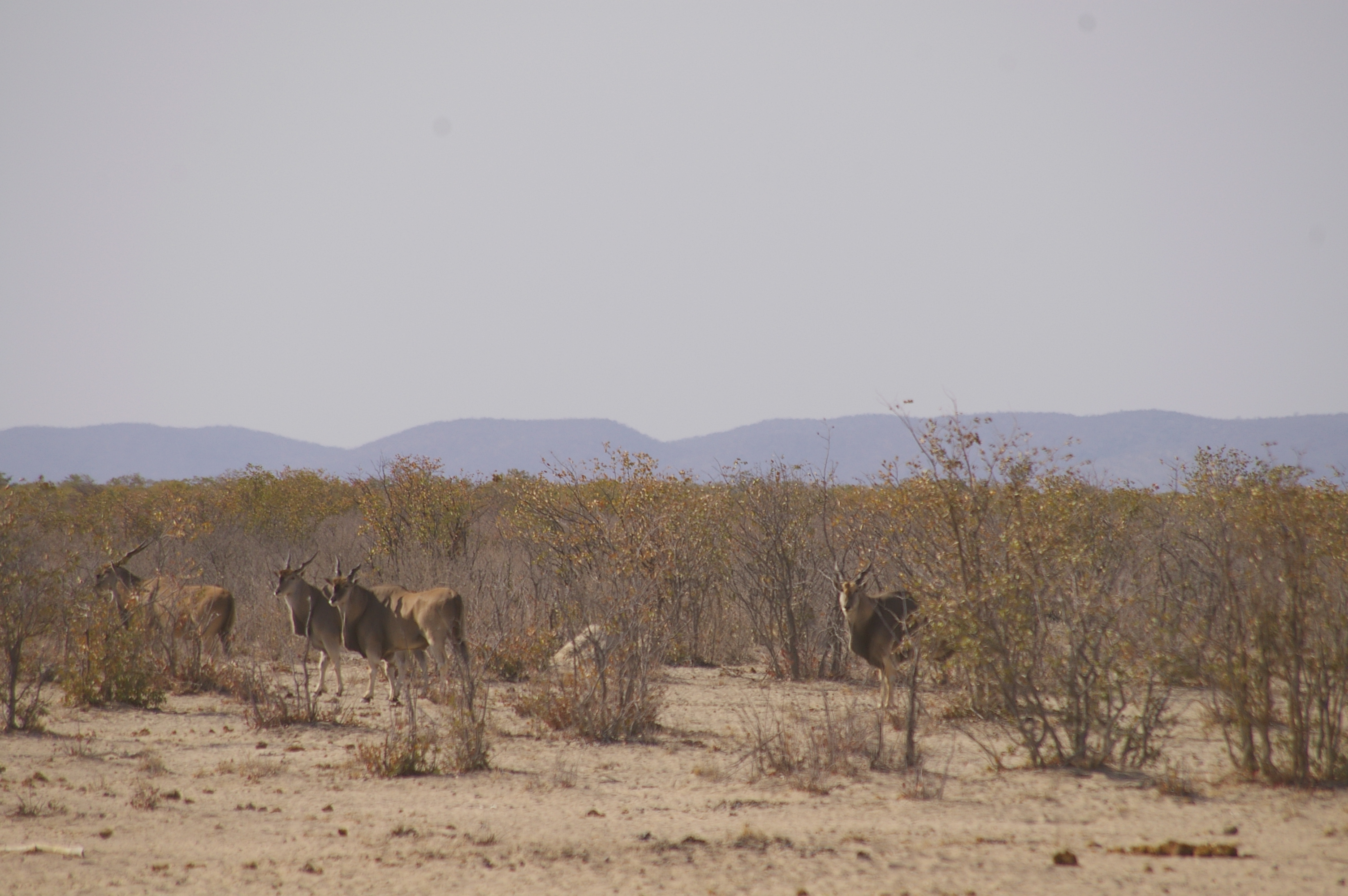 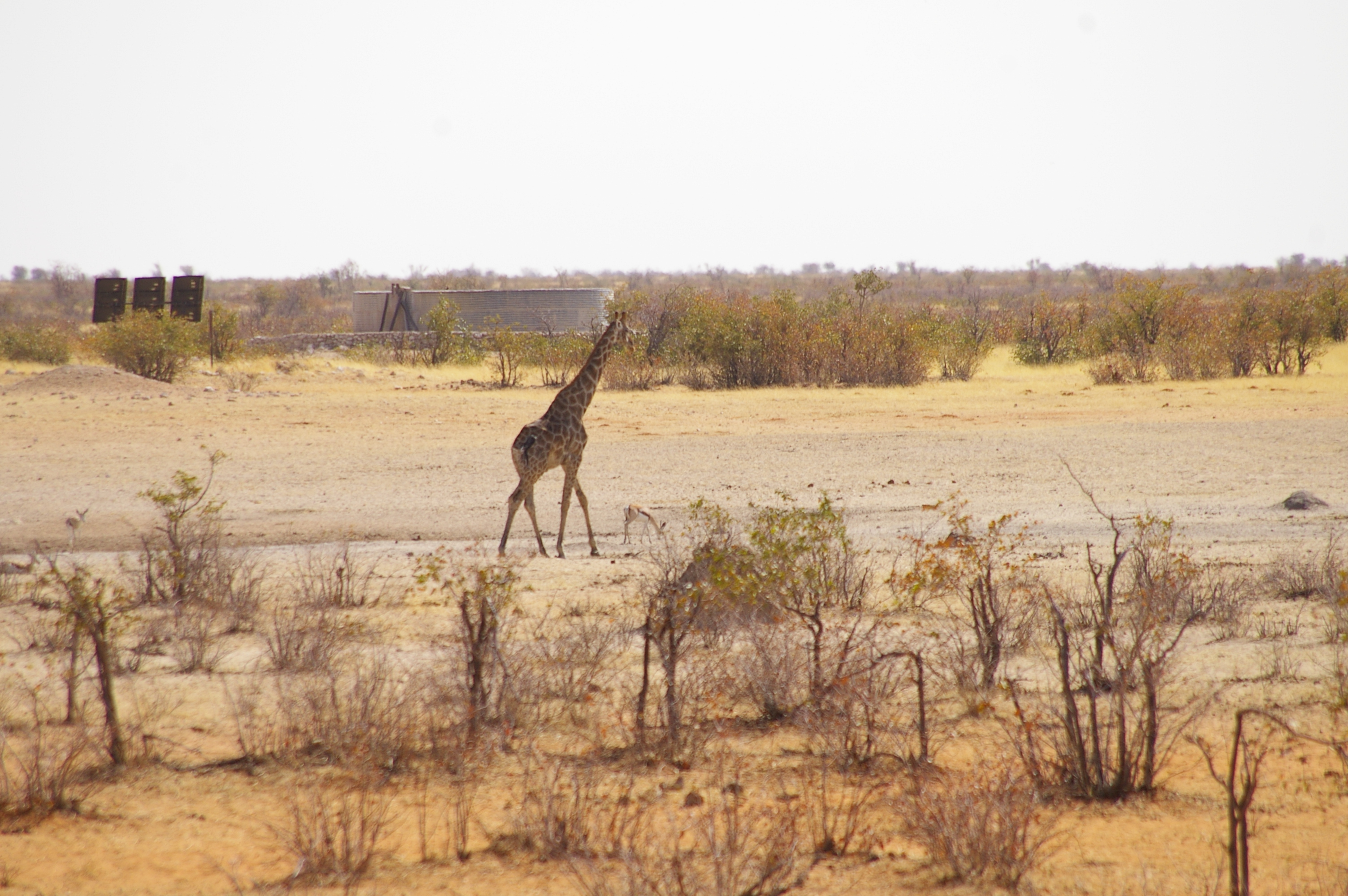 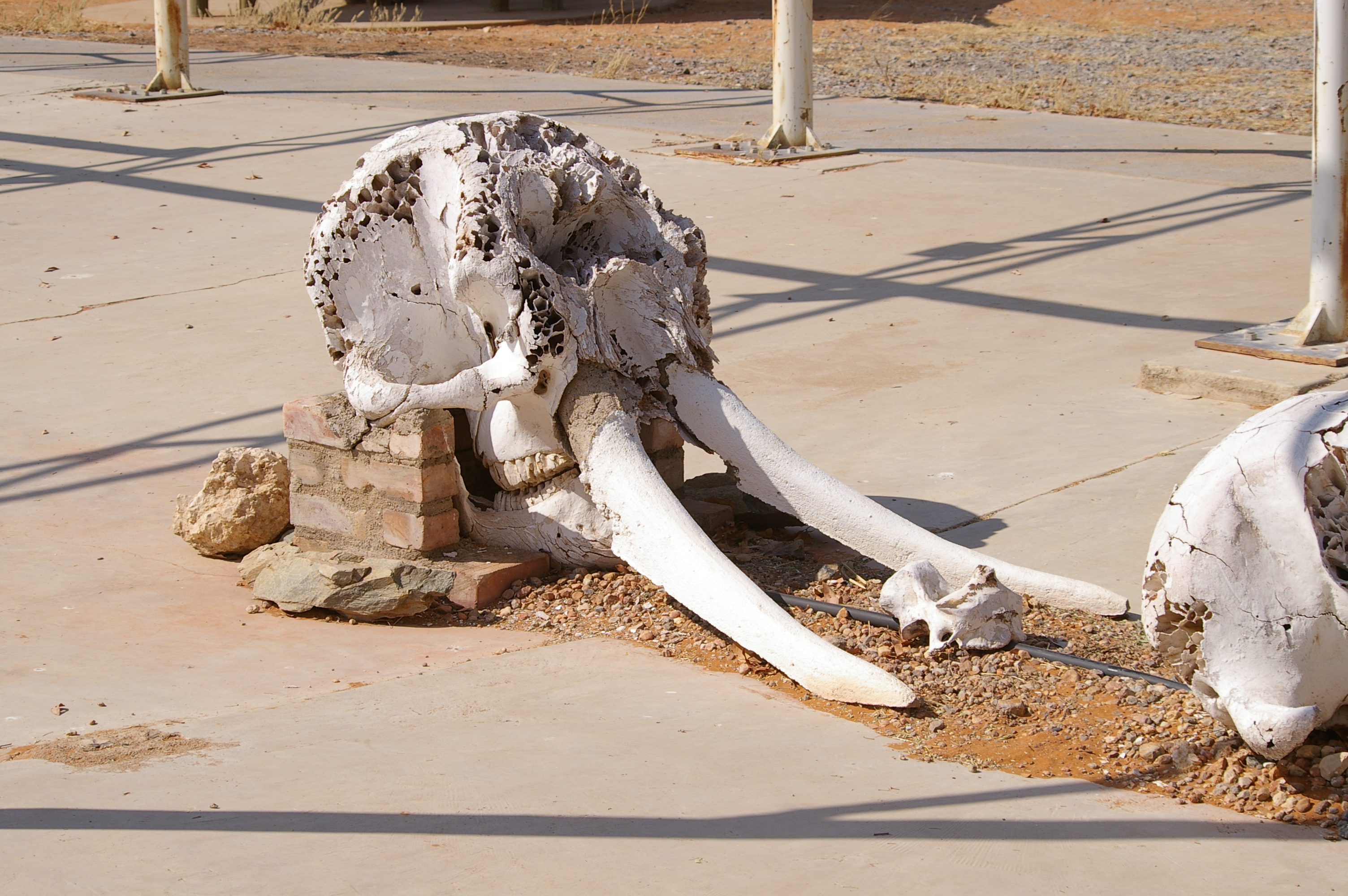 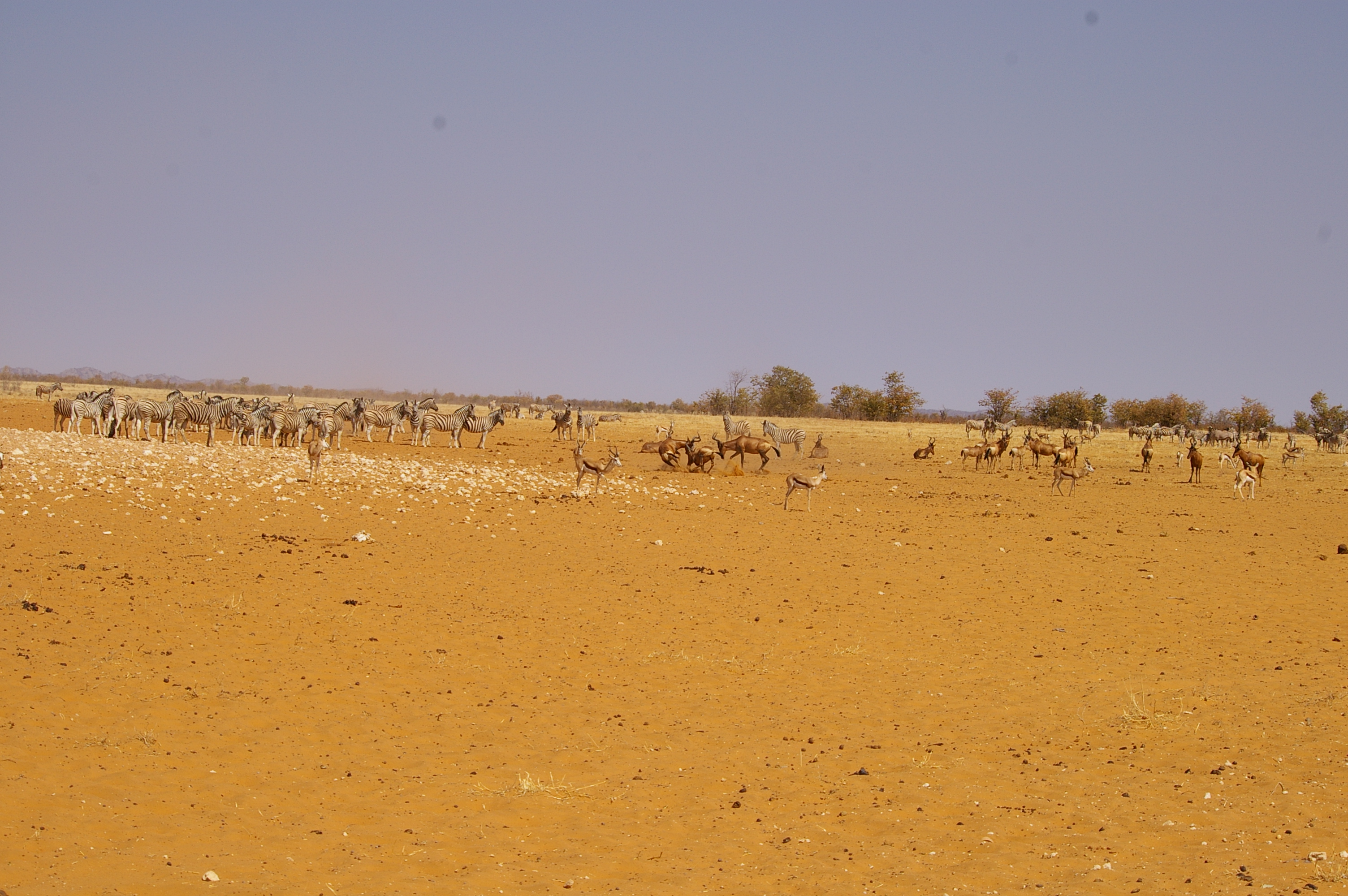 The highlight of the day was seeing that herd of 16 Elephant, I could load a 100 pictures of the park we only saw a small portion, I will be back.

Last day to hunt we head to Ruan’s for Hartebeest and Warthog. As we are driving on the highway along side Ruan’s farm we spot a nice Hartebeest, Kelly and Ruan do a stalk, Me, Brandon and Jonus go into the farm and wait. about a hour later Ruan and Kelly show up. Change of plans one of Ruan’s guys shows up to take us to a waterhole for Warthog. Kelly is going to keep hunting Hartebeest till he gets one or he drops. Not much at the waterhole, there is a Baboon about 400 meters away so been bored I go for a walk to see if I can get a shot at it no luck. On the way back I manage to scare off the only Warthog that came to the water hole. Needless to say Brandon’s a little upset. It is about 3:00 PM at this time and Ruan called Kelly has his Hartebeest. They come and pick us up and we try to find a Warthog for Brandon, we spot a couple and he does 2 stalks with out getting a shot off. I get a shot at a Baboon off hand at about 300 meters, but only dusted the rock under him. Kelly worked hard for most of his animals and so did Brandon I’m very proud of them, they can be a handful at times but deep down they’re good boys. 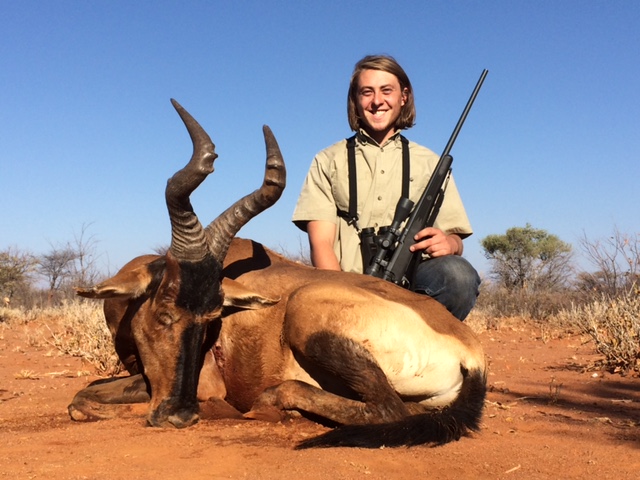 So ends our hunt with Shona Hunting Adventures we had a awesome hunt ended up with 17 animals in the salt. Sadly we lost one animal. Good people, made some new friends, tried some good and different food.