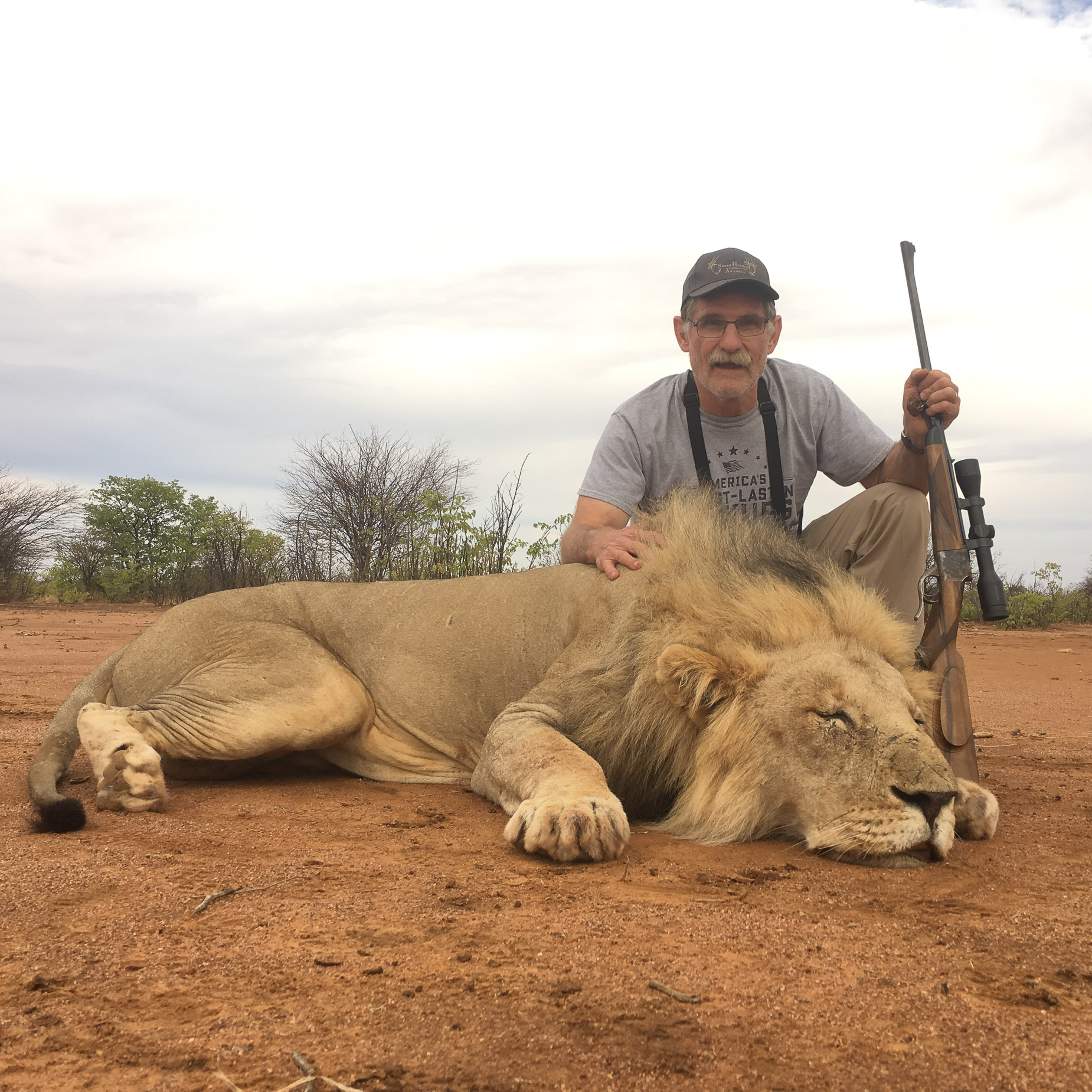 The Luckiest Man in Africa

In March of 2019, I had a lifelong dream fulfilled when I went on a safari in Namibia with Shona Hunting Adventures. My hunting companions were-two fine young men (my sons). We left Canadian winter, lives made hectic with business, careers and pressures behind. I giggle when I see those relaxed smiles in the pictures.

My P.H. Johan Veldsman, (we later nicknamed him Jol) phoned me before the trip to touch base. I said I was a bit of a minimalist and a purist, I preferred a wilderness experience to catered luxury.

We arrived at the lodge and spent one night. After orientation and sighting in the rifle, we headed out to ‘camp’. Johan certainly delivered on the classic safari ambiance. There were outfitters tents with safari cars parked out front. The P.H. apprentice (also named Johan, immediately nicknamed J02) said the elephants had been through the camp the night before! The scene was just like pictures out of one of Jack O’Connors, Robert Ruark or Peter Capstick’s books!

Since this is Gunmaker magazine, I should put some words down on the rifle.

I built my rifle on a small Hagn action. I used artistic license and rounded the top and bottom edges of the action off, thus no panels in front or back of the receiver. I used a 25″ Ron Smith (local guy in my county) gain twist barrel. It is full octagon with integral quarter rib, sling swivel and front sight ramp. I topped it with a 4x Kahles scope in Talley quick detachable rings. I stocked it with a nice, but not over the top piece of English walnut. It is chambered for a .270 Winchester with that new reloader 26 and the gain twist barrel, I can get 3100 FPS with a 150 gr bullet! It will shoot 3 shots 1″ and I have not cleaned that barrel for 500 rounds! The whole rifle, including the sling weighs less than 8 lbs! It balances well, is a delight to carry and is lively in the hands.

We were after zebra, gemsbok, warthog and baboon. My P.H. had no concerns about using that caliber on the bigger animals, “it’s all shot placement”, he said. He did say, If we get charged by an elephant though, don’t bother shooting with that thing!”

The first thing on the agenda was zebra. The first evening out we stalked a zebra up on a mountainside but as we got close it was apparent that it was a mare, obviously pregnant and accompanied by a foal. Johan said “l think we should pass on that one” Shona Hunting Adventures motto is ‘conservation hunting professionals”. That appealed to my purist inclinations.

The next morning we were back up in the hills, got out of the vehicles and hiked from kopi to kopi glassing from the top to find game. Then Jonas, the head tracker spotted zebras about a mile away. Johan lead me to within 150 yards and the zebra bolted at the shot. We found the old mare piled up about 100 yards away. She was too old and tough for human consumption but good for leopard bait. A good management harvest.

It wasn’t until the end of the next day that we connected again. We had given up for the day and were on our way back to camp with minutes left of light when we came upon a group of oryx. There was a nice one too! We were out of the truck and in about 300 yards of stalking, I made a 120 yard shot. The animal did a little circle, staggered 20 yards and flopped over. It wasn’t until I got up close that I could appreciate the trophy, 39″!

I had pretty much got what I came for now and I wanted my sons to get something. We were in a blind, watching a clearing that had some water when an old bull oryx came out. He had old stubby broken horns, all beat up. My son, Jarod at 31 years old didn’t have a lot of money for taxidermy or space on the wall. This would make a skull mount which would have some character. Down it went!

My son, Evan had hoped for a warthog skull for his workshop wall. Due to the drought conditions, warthogs were not plentiful all of the time. We would have to try some other habitat for that. However opportunity for a baboon presented itself and Evan took a shot. The thing flopped around a bit and was still. The P.H. apprentice had his Jack Russel dog with him The dog went up and got right in the baboon’s face, sniffing it — when suddenly the thing came back to life, grabbed the dog by the ears, was about to eat him. Evan shot the baboon again and saved the dog! As a veteran of Afghanistan and a cop on the mean streets of Calgary, he has done more meaningful heroics but those are stories for some other time.

The next day we headed off to some new country to find a couple of warthogs. We had just come through the gates on a ranch when along the side of the road was a good pig.

Evan grabbed the rifle and he and Jonas headed into the bush after it. I stood on the road to mark the spot and Jol headed to the ranch house to check in with the owner. Some time went by and this little bubblegum car rolled up, it was the rancher. He knew who I was and said “do you want to shoot a lion?” I said, “aw shucks, I just can’t afford that sort of thing”.

He then proceeded to tell me the whole story. He had lost 80 head of cattle to lions and hyenas last year. He found lions back on his place 2 weeks previously so he called the government “lion people”, who showed up the next day…. With cameras. Nothing happened since. He told me 85 lions are shot every year on the border of the nearby park by ranchers. As long as it is reported and above board, it is ok. Here is the thing, you CANNOT HAVE THE LION, not a tooth, not a claw, not even a hair! You

CANNOT pay me anything for it! If anything changes hands between us, we go to jail! But you can shoot them and take some pictures! My ranch hands have two of them out by the back fence. “Do you want to shoot a lion?” “Well…. Yea!!”

Jol came roaring back in the car and we headed for the lions. We found the ranch hands in a pickup truck by the back fence, watching two old male lions.

We got a little closer and I shot. Both lions jumped up, the one I shot ran around a nearby bush, fell over and kicked once and was still. The other one took off, I didn’t see him again.

There were 8 people milling around. Jol was a bit tense, “that other lion will come back! Quick, get that thing in the back and let’s get out of here”, we moved to another location, took some pictures, visited the rancher for a while and then went back to looking for a warthog. We never did find one.

Honest truth, I didn’t have much heart for anything, all I could think of was “l got a lion!”

At one point, we found ourselves with internet service. The boys sent a picture to their mother— “look what dad got, $65,000 USD shot!” They didn’t immediately reveal the rest of the story….stinkers! That night at the dinner table, Jol looks at me and said, “you have to be the luckiest man in Africa!” Two years previously, Jarod had done a mission trip to Africa where he taught carpentry in rural Kenya. The people there had problems with the baboons eating the corn. They were a constant nuisance. He wanted a baboon skull for his workshop wall too! That happened the next day.

At one time we were going from Point A to B and saw some springboks. As we watched the big ram was run off by a younger, stronger ram. Jol and I followed and stalked on foot for close to 3 hours before I finally got a shot. I hadn’t intended to get a springbok but I had been so well served and knew this outfit wasn’t getting rich on my low budget safari, I thought I ought to spend a little more. I’m glad I did.

Johan said since we couldn’t find a warthog for Evan, why not just shoot another oryx for free, more leopard bait was needed and Evan might as well do the shooting. The only condition was don’t shoot a nice trophy. We saw dozens of oryx in the next 2 days, all nice trophies or pregnant cows. It was actually hard to find a non-trophy Oryx. Find one, we did, at the last lick of light on the last day. An old broken down bull, identical to his brother’s, another good game management harvest.

That pretty little rifle looks a little worse for wear. The color case hardening is wearing off in spots, the bluing has a few dings and the stock has marks all over it. I look at them like smile lines on my wife’s face, they are good memories. I can’t sell that rifle ever. It represents good father/son time and I now have the three prettiest animals from Africa — Oryx, springbok and zebra on the wall and I got one of the most impressive Big 5.

When someone comes by your table at the guild show and says “how can you take a gun like that in the field, you might scratch it” – Just tell them about the luckiest man in Africa. 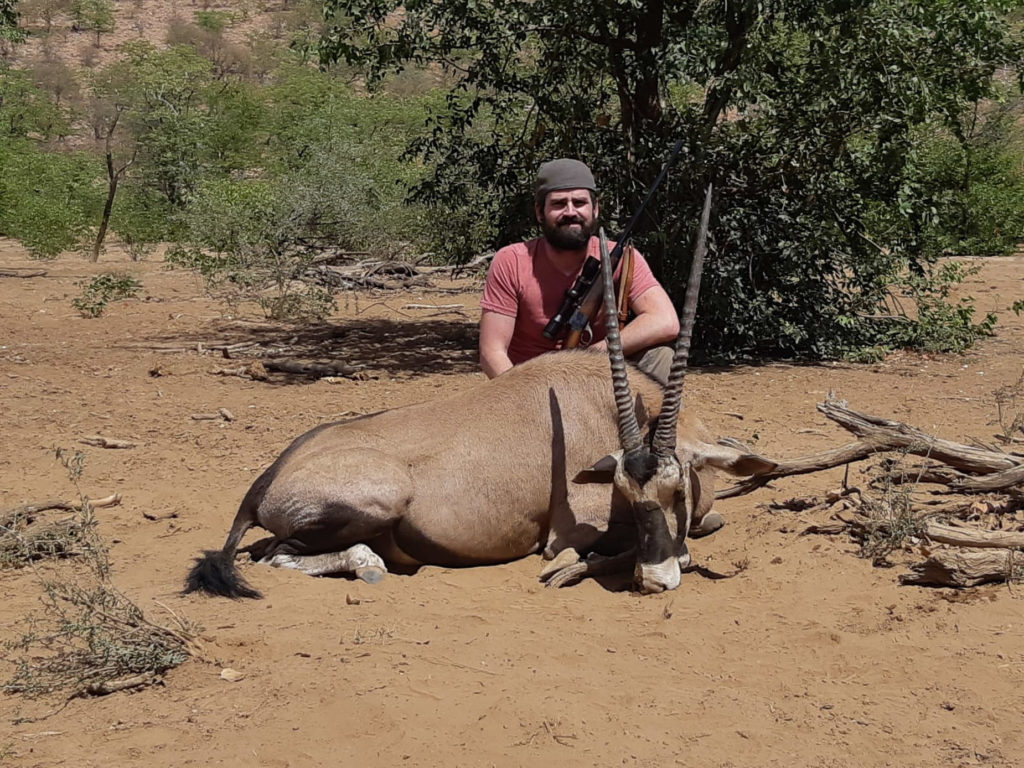 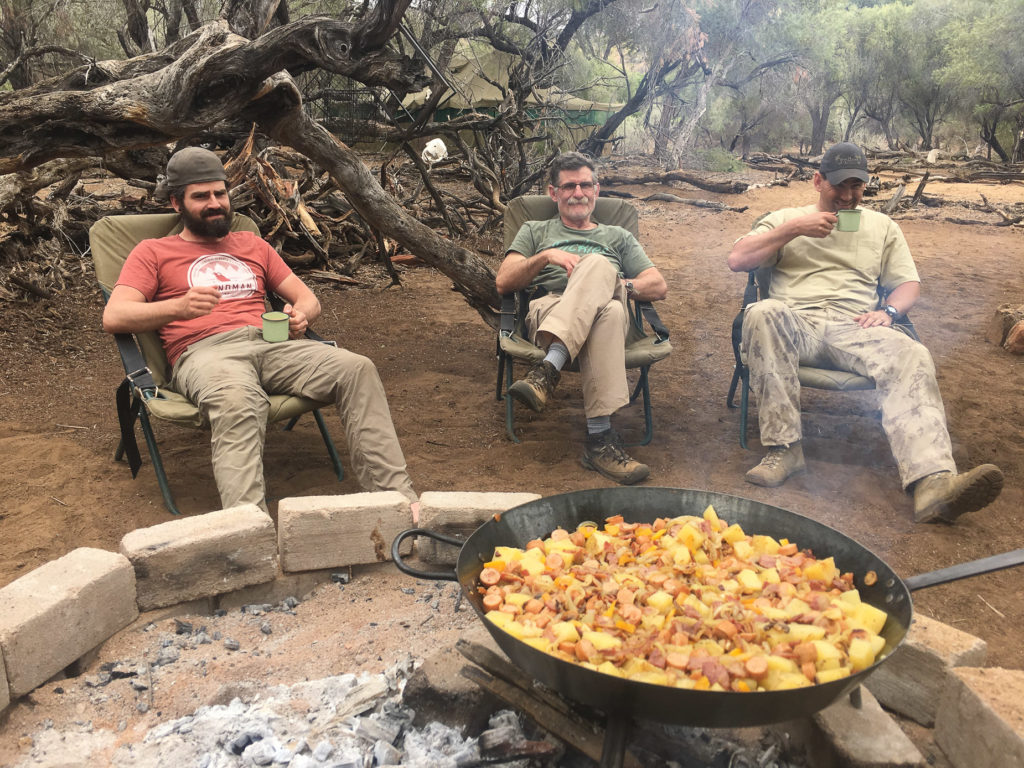 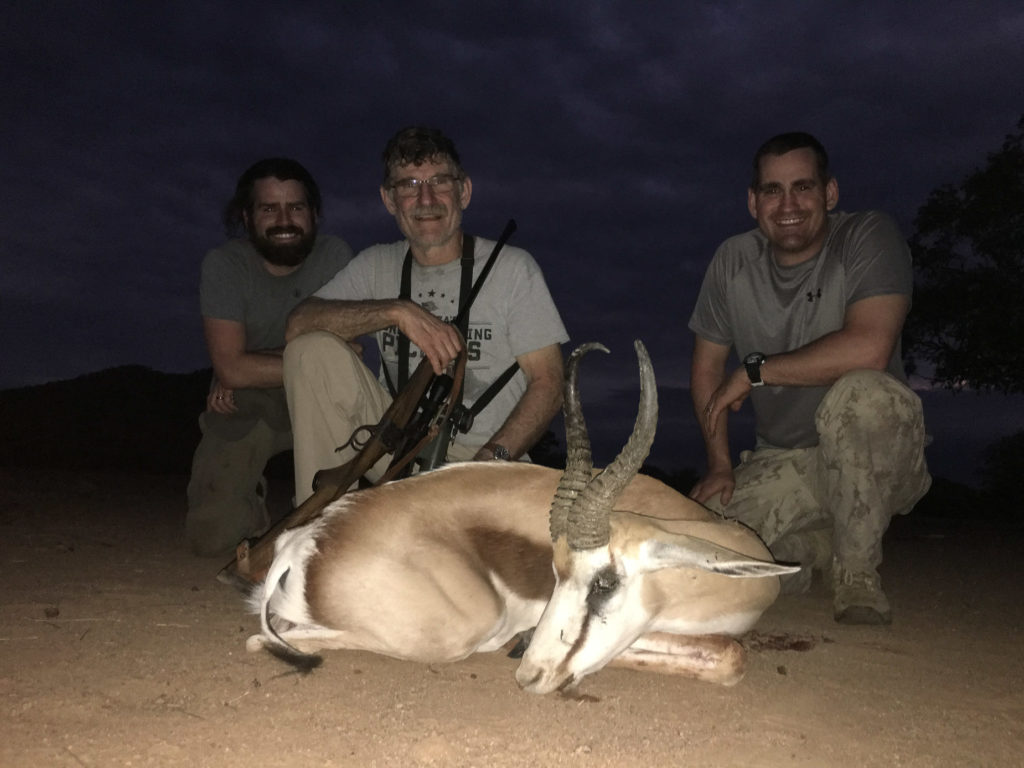 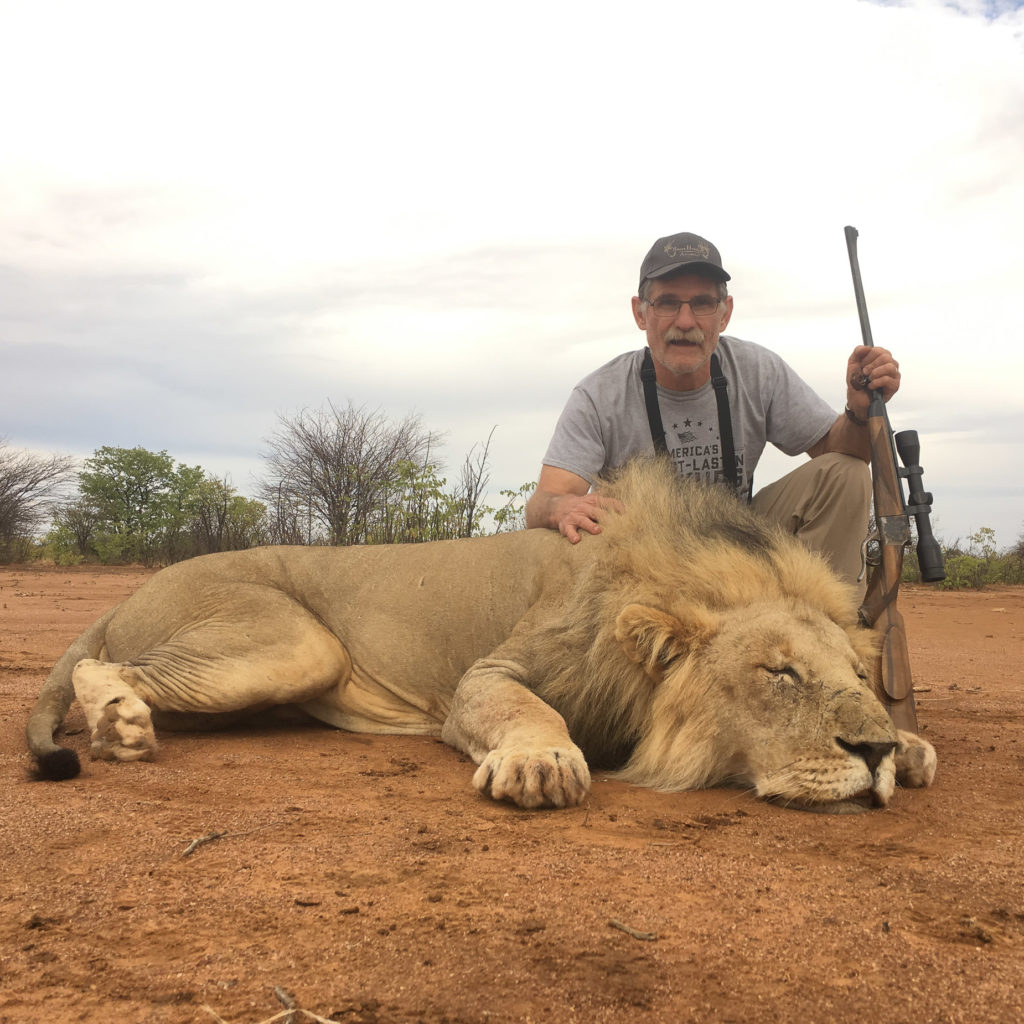 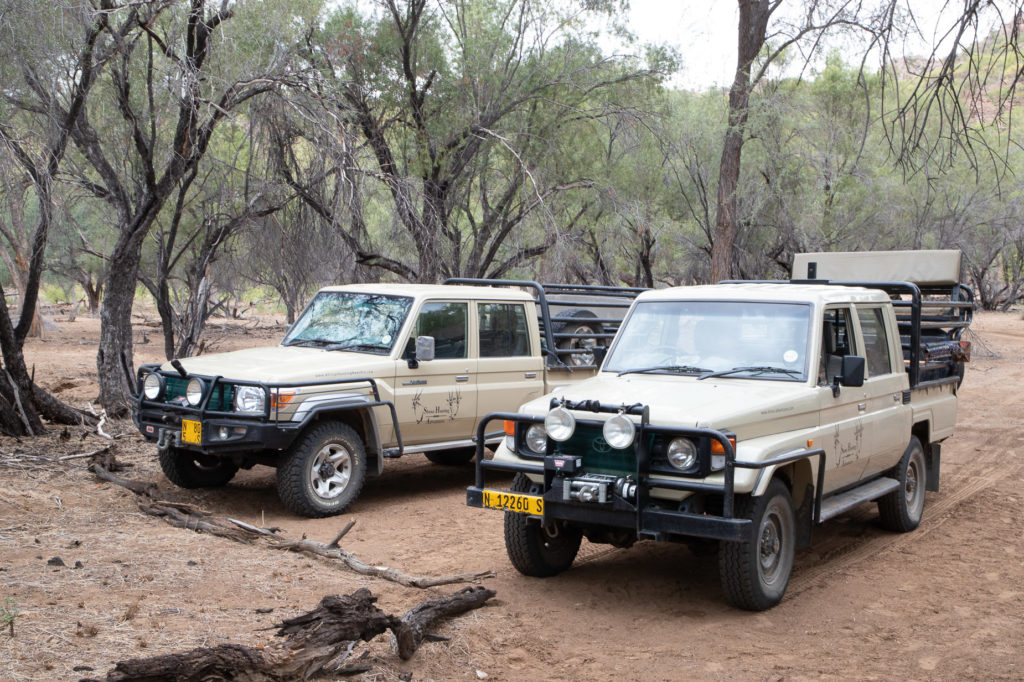 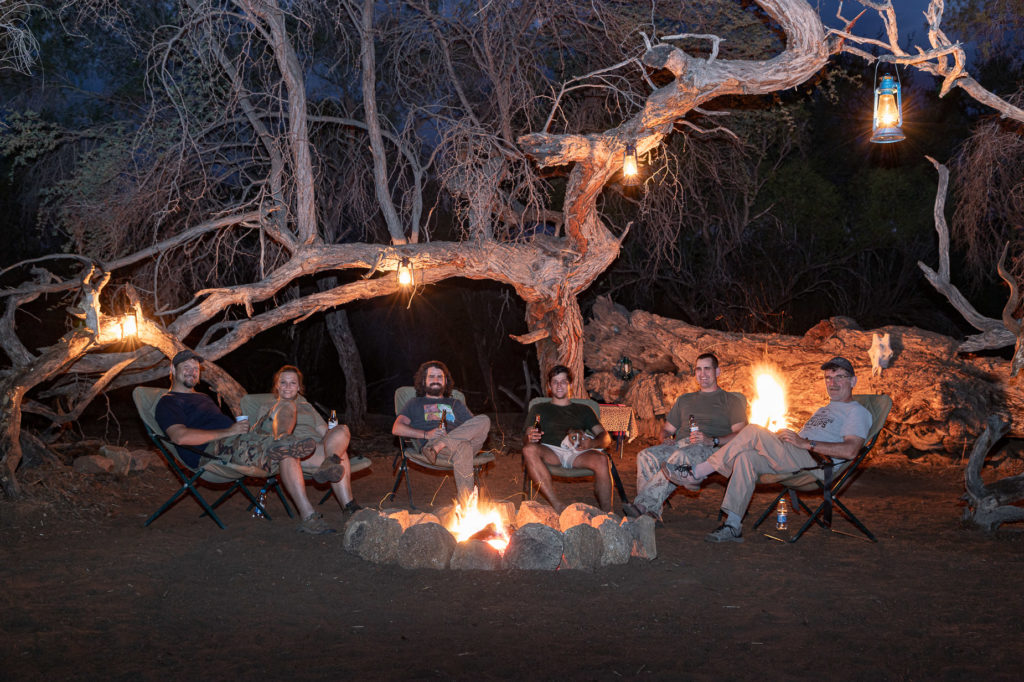 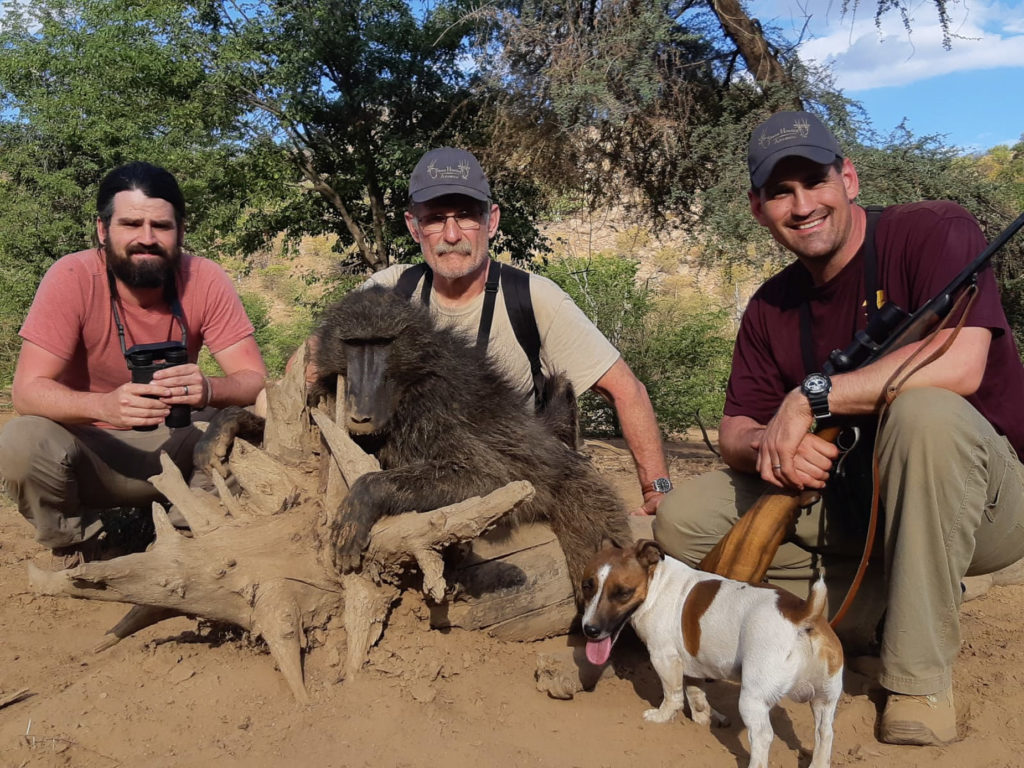